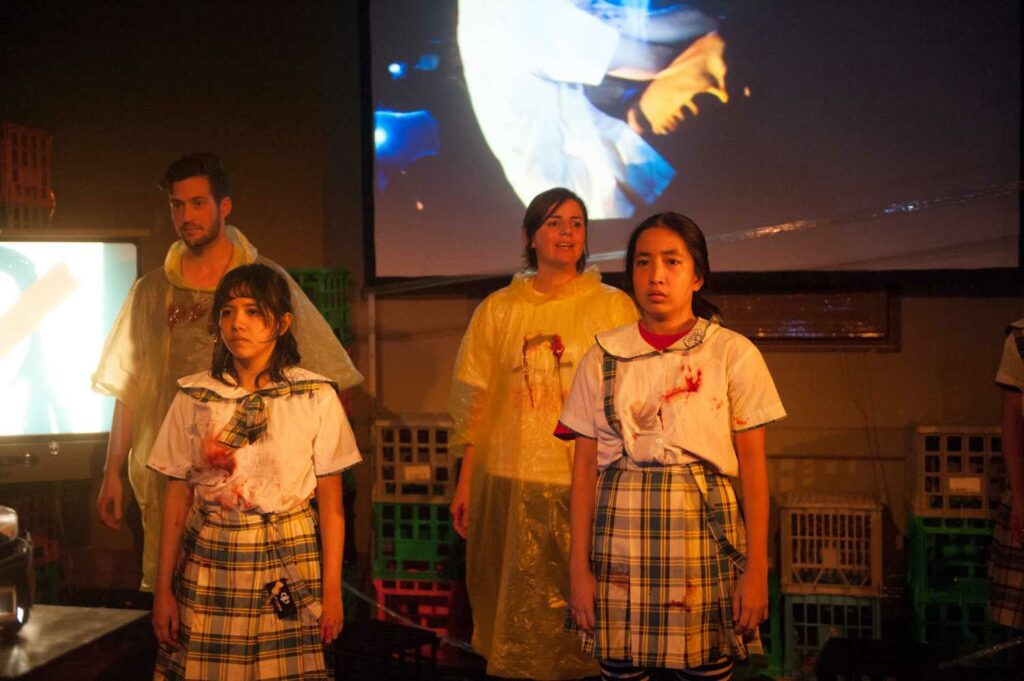 I am seated on a stool in Melbourne’s Art House, on the last day of the city’s Next Wave Festival. I have just eaten dried mango, and looked at a table-top exhibition of gory wounds, guns and blood packets – props from a play that will soon be performed on stage as the final act of a three year long ‘meta’ saga.

Here’s the background to this saga. In 2011, four young members of the Australian collective Too Many Weapons collaborated with the Filipino site-specific theatre company Sipat Lawin to develop Battalia Royale, Koushun Takami’s infamous 1999 Japanese book (which preceded the similarly themed Hunger Games), into a play. The play was designed to be a live action game held at a specific site, in which the audience would run around the venue, following the 40 different school children characters as they fought to their gory deaths.

The performance became a transmedia phenomenon and generated a fandom that spiraled out of control as the different iterations of the performances were performed in the Philippines. It literally took on a life of its own, with Facebook pages being created about each character, and fans participation both online, as well as in the live action performances. Certain decisions for instance, on whether to kill a particular performer in the middle of the play were taken through live audience votes. The play also generated huge debates about the nature of violence, in the Philippines and internationally, with UN representatives chastising the creators for creating what they felt was an experience that desensitized the act of killing in a country like the Philippines which was beset by extreme poverty and violence.

I am mesmerized from the moment the action begins. I don’t know how to classify what it is that I see. Documentary-theatre? Public therapy? The performers narrate part of the story, use audio-visual slides for other parts, and also act out certain scenes live. The action breathlessly and furiously flits between past and present, between Facebook timelines and YouTube video clips, between the insane reaction to the violence in the play that their performances generated, and the very intense personal feelings that performing this violence generates within themselves.

The mixed-media approach has me immersed completely in their world. I jerk abruptly in my seat as a gunshot rings out and blood spurts from a character. How boundaries are blurring, I think. Between the virtual and the real, between the global and the very specific. What is uniform across the world though is the shared moment when performers fearlessly bare their souls to an audience, and the audience responds in equal measure.

The personal testimonies are incredibly moving. An actress who plays the character of June tells us about how she was conflicted when she would hear the audience cheering while she was in the process of being murdered on stage. The human part of her felt really disgusted at the audience while the performer in her wanted to continue performing effectively. As her eyes fill up with tears, so do mine, and as I look around, there are others too, united in grief, solidarity and recognition, at what human nature compels us to do.

My reason for being in Melbourne is as radical as the play I have just witnessed. I am here to give a talk as part of a unique global conference of artists, performers and funders called IETM. The conference originates in Europe. This year they want to reach out to Asia, and the place they decide to do this is Australia! Makes sense? Of course it does. This is globalization at play, and countries like Australia, and more specifically, cities like Melbourne, are recognizing that there is great value in being a cultural node – through which one can empower international understanding, connections and collaborations.

As I listen to the incredible music of the avant-garde Indonesian duo that comprise Senyawa the next day, I feel a surge of gratitude for being witness to this magic. Senyawa comprises Rully Shabara’s Metallica-inspired dada-esque vocals fused with the neo-tribalism of instrument builder, Wukir Suryadi, who plays a bunch of his own inventions, such as a handcrafted ‘bamboo spear’ – a stem of bamboo strung with percussive strips of the plant’s skin along side steel strings. Their Melbourne show at the nightclub Tote is completely sold out. Words are irrelevant when music connects so deeply. We are all richer for this experience. Like the Sipat Lawin Ensemble from the Phillipines, and so many of the other Asian artists and performers I encounter at IETM, Senyawa are also building their brand and their fan base across boundaries, using the online world astutely in this process.

As part of my visit, I take part in a conference on “soft diplomacy” held at the wonderful Wheeler Centre, which has been funded by Tony and Maureen Wheeler, the Lonely Planet creators. I talk about how future institutions will be built – at the margins, and as hyphenated in-between spaces, and about the exciting ecosystem of ideas coming out of India that most people across the world don’t know of – the world of hackerspaces, maker-festivals, pop up buildings and citizen media. Along with my host Kate Ben-Tovin, the producer of last year’s cool Oz Fest in India, I talk about how in a world where media and migration make local-global links blurred, Australia can play a major role as a node, and it might be Gary and George from Masterchef that might play a role in soothing feathers after a racism episode, and not necessarily governmental efforts.

At a ‘meta’ level, after I return from Melbourne, I look back and view my own visit through the lens of soft diplomacy itself. Like any other major “first world” city, Melbourne has the infrastructure right. There are impressive museums, parks and walkways. So I greatly enjoyed activities like walking on the Yarra river-bank, viewing some rare William Blake paintings at the National Gallery and seeing an excellent rendition of Carmen by Opera Australia at the Art Center during my visit.

But more than the hardware – even in the cultural realm, it is the software, that certain extra something, that makes a difference between good and great. The Melbourne identity that I witnessed, if I had to package it as software, was about open-ness and warmth.

My memories include chatting with the wonderful Lazlo Theodore Evenhuis, who went pine mushrooming on Mt Macedon the morning of my visit to Gils Diner that he manages (part warehouse, part bakery, it is super chic), cooks me the mushrooms he had picked in a beautiful broth. The fabulous Christine Barro welcomes me with open arms into her Aladdin’s cave of fashion. We spend an hour trying out the range of

hats, jewellery, handbags, shoes and clothes that she has curated from her travels across the world, including labels like Lanvin, Stella McCartney, Celine, Adrian Lewis, and Christopher Graf. (Check out the exquisite gold hand-cut lace mask by London milliner Phillip Treacy that Christine is wearing with me in the photograph alongside!).  A meandering beautiful conversation about art, dance, gender and more with dancer James Andrews, who was channeling recent Eurovision winner Conchita Wurst, as he posed for me outside Art House Melbourne.

Australia’s famous actress, comedian, television presenter, radio host and author, Magda Szubanski (best known as the farmer’s wife Esme Hoggett in the hit films Babe and Babe in the City), squeezes time out from her crazy schedule to take me café-hopping in the artist district of Fitzroy. Phillip Adams, the celebrated artist-dancer, takes me on a secret safari of his favourite city joints, including the Anna Schwartz art gallery (that has a super exhibition by Callum Morton called Neighbourhood Watch) and the extended rooftop swimming pool of the iconic Adelphi hotel. He tells me about how he hung out with Vidya Balan some days ago, and even dressed her up in a sari designed by an Australian artist. Just can’t escape Bollywood, can we?