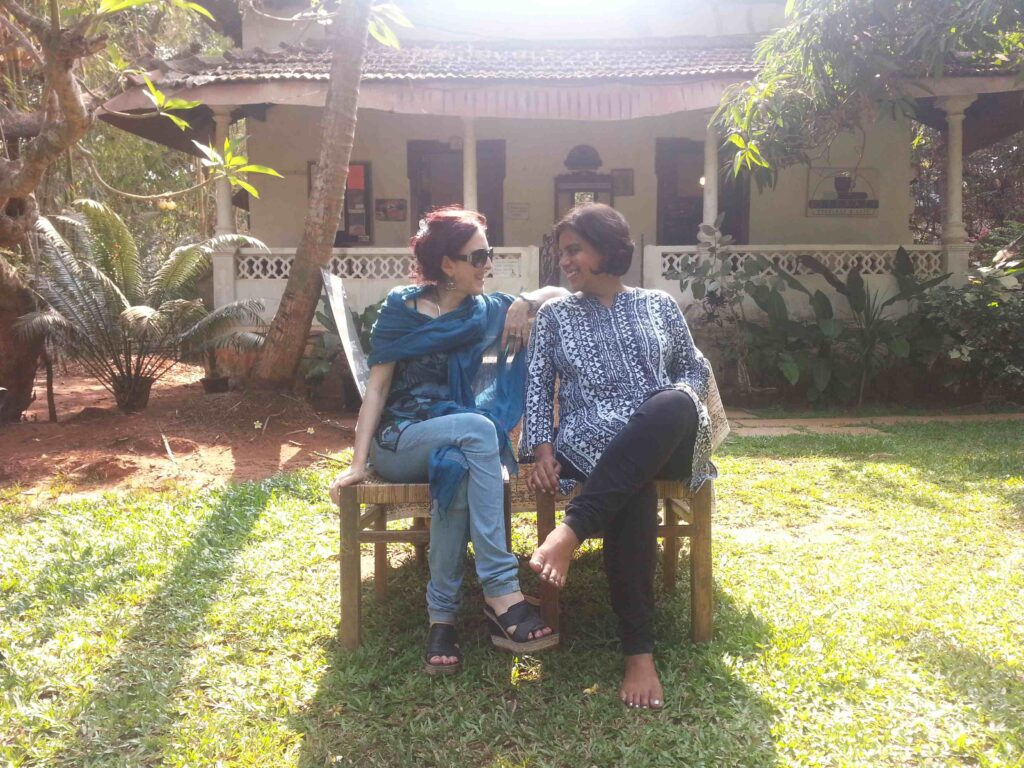 I am writing this in Goa, in the midst of my friend Radhika Gupta (Moonriver, Zambar on the Moon) and Naveen Sharma’s beautiful wedding celebrations; a whirlwind blast of intimate luxury. The past two days have flown by in a blur. Champagne, divine steamed lemon grass snapper and coconut and jackfruit panna cotta at Indian’s finest restaurant Bomra’s; a concert at Ashwem’s La Plage, and stand up comedy and dancing under the stars with Delhi designers Aneeth Arora and Rakesh Thakore, Nichola Bachman from the Red Cross, and other fun friends of Radhika and Naveen from all over the world. And then I wade into Goa’s creative arts scene, and come back re-energized.

My first stop is Literati. Like Radhika, Divya Kapur too is a lawyer from Delhi who decided to change professions mid career. Divya has taken over an exquisite old Candolim Portuguese house with a garden, and turned it into what is ostensibly a bookstore, but is actually much, much more – a haven of creativity and one of the throbbing nodes of art and culture on the Goa scene. Book readings, book clubs, soirees, discussions…. all of Goa’s literati gather regularly at Divya’s – they include now, a fairly large bunch of authors and artists that have made Goa their home, such as Amitav Ghosh and Dayanita Singh. I walk down the charming garden path that leads to Literati and am greeted and licked by the heavy-breathing Frieda, Divya’s Labrador.  I enter the bungalow, which is essentially a series of connected rooms, all piled from the floor to the ceiling with thousands of old and new books and it is like entering another world.

I am here to chat with Maragaret Mascaranhes – author, artist, performer and teacher. (She is the founder of the Blue Shore prison art project at Goa’s Aguada jail). Maragret has lived an incredible life – across the US, France, Venezuela, and her work is equally global in its resonance. Her debut novel Skin was a diasporic journey, set in Goa. Her next The Disappearance of Irene Dos Santos was a magic realism foray into contemporary Venezuela, and now she tells me that she is contemplating setting her next work in the Middle East. That night, I proceed to devour Margaret’s book of poems Triage – as I might a hungry, insatiable, lost lover. Consider this gem, from which the book gets its title:

There should be triage

for spirits broken in the

There should be euthanasia

for hearts too wrecked

There should be state funerals

for words, whose abject poverty

As we banter about everything under the sun (our joint fondness for Shobha De’s work, Margaret’s pet Rottweilers, Goa’s intermittent electricity and more), Divya joins us from her home, situated behind Literati. This is idyllic bliss, to be able to walk from home to work in 30 seconds, and I am tempted to give up my Mumbai life and relocate to Goa too, but I remember soon enough that I’m a Viva Vikhrolian and we are creating a similar vibe in our own amchi Mumbai.

Margaret has curated among others, art exhibitions at Raj and Dipti Salgaocars’ Sunaparanta Centre for the Arts where she served as founding director until recently. In its six years of existence, the centre has fuelled a renaissance in Goa’s contemporary art scene. Part studio, part residency, part exhibition space, part workshop space and part discussion zone – it connects Goan art and literature lovers with international practitioners, through its year-long schedule of activities and exhibitions

The beautiful Sunaparanta bungalow in the Altinho hills of Panjim is a joy to behold when I visit. They are having an exhibit of Aradhana Seth’s work, part of their Seth family showcase. I’ve seen the work before in Mumbai, but its fun to revisit. I check if there’s a Shanghvi Salon scheduled but not during the summer, so I make myself content by lunching at Bodega – the lovely courtyard café and bakery at Sunaparanta. I order a shrimp po-boy, a healthy lentil salad, a turkey quiche, and orange cake and chat up Vandana Naik, formerly of the W hotel in New York, who has set up, called Bodega, with her partner Valmiki. After just a few bites, I join a long list of Vandana admirers – including Aretha Franklin, the Dalai Lama, George Clooney, Anna Wintour, George Bush Beyonce, and Mariah Carey – in praising Vandana’s cooking and baking skills. Now for a nap!

A day later, I am in a less institutionalized, though equally collaborative art space, with Sacha Mendes at her lovely Sacha’s Shop. I am here to check out The Summer Project – a quirky fusion of art, fashion and food, co-curated by Sacha and Kanchi Mehta and spread across Sacha’s Shop and the Black Sheep bistro next door. I love Savio Jon and Tilla’s clothes, and the art includes striking works by Tushar Goyal and Patricia Geraldes but my favourite is a mural of Sacha herself, by Srijan Jha, painted right outside the entrance to the shop!

I then pop into the 500-year-old Reis Magos Fort to see Mario Miranda’s works and am conscious of just how special Goa’s art scene is today. The Reis Magos, loving restored by the Helen Hamlyn Trust in partnership with the Government of Goa and INTACH, has morphed from a crumbling fort to a cultural and heritage center. It is a spectacular space, with ocean views to die for. Could there be a more dramatic location for a cultural space in India?

One of my Goa highlights is visiting the Video Volunteers bungalow in Anjuna. Founded by the husband-wife team of Stalin K. and Jessica Mayberry in 2003, Video Volunteers is an organization that aims to give voice to people who generally go unheard in mainstream media. They train individuals from disadvantaged communities how to make, edit and distribute their own videos, and tell their own stories. Consider their achievements so far. They have already trained 300 community producers, of which more than 100 are working full-time, reporting on underreported stories across 1000 villages in almost every state in India. In addition, they have held over 2000nighttime community screenings, attended by over 300 thousand people, and thousands more have viewed these videos online around the world. Their work has enabled 17 thousand people to take action and implement local solutions, thus directly benefiting over 6 lakh people and giving voice to millions more.

Both Stalin and Jessica have such interesting backgrounds. Stalin was the convener of the Community Radio Forum-India until 2009 and was one of the core group that drafted the legislation that made community radio legal in India. His film work on the issue of untouchability has brought attention to Dalit issues, especially his 1996 film Lesser Humans on manual scavenging, and his 2007 film India Untouched, that surveyed untouchability across 8 states, four religions and all social classes in India. He was also featured on the first season of Aamir Khan’s Satyamev Jayate. Jessic is a TED Fellow, a Clinton Fellow of the American India Foundation, and a Fellow of Echoing Green, who previously worked in television in New York at Court TV, the Fox News Channel, and CNN after graduating from Oxford. Stalin and Jessica met while in Ahmedabad, making a documentary on Seva, and decided to change the world together.

Stalin is away when I visit, but I hang out with Jessica and the lovely Video Volunteers team, or rather family, including dogs and kittens. The energy and passion in the house is infectious. They tell me about their newest initiative, India Unheard, India’s first community based news service. Do visit the Video Volunteers website, dear Verve readers (https://www.videovolunteers.org/) to see some of the most fascinating stories from our country, that you won’t ever find on the nightly news. Among other topics, we talk elections, and Jessica tells me that Video Volunteers aims to have at least one correspondent in each of India’s 671 districts by the 2019 general election. I have no doubt that they will succeed.

Next day I find myself hanging out with entrepreneur Gurpreet Singh who is telling me about his new VC funded company. The company is called Browntape, and Gurpreet runs it with his co-founders Ian and Piyush, out of an open, breezy office in Porvorim, which overlooks the Chorao bird sanctuary. Browntape is making a suite of tools to make Indian e-commerce entrepreneurs automate their businesses for scale. Gurpreet tells me that e-commerce is estimated at $3 billion in India today, as compared China is at $150 billion. As India grows, hundreds of small e-commerce businesses will grow, alongside the larger players like a Flipkart or Snapdeal, and products like Gurpreet’s, that combine order processing, shipping and inventory will become more useful.

While talking to Gurpreet, I am reminded of my conversation with Flipkart founder Binny Bansal some days earlier, in Mumbai. Binny had told me about how they’re scaling up to mobile rapidly, and I tell him about how much I loved his recent ad campaign. If Flipkart is the poster boy of India’s ecommerce revolution, entrepreneurs like Gurpreet are the silent infrastructure builders behind. It’s really fascinating that these new companies are being built out of smaller towns like Goa.