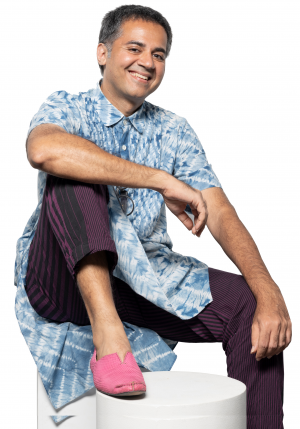 I am an author, public speaker, culture curator, and inclusion advocate. I have had a hyphenated career that has spanned academia, media and the corporate world, and involved founding India’s first youth expression website, editing fashion and lifestyle magazines, setting up a media convergence think tank at MIT and helping re-imagine the future of two of India’s largest business conglomerates through a series of cultural experiments. (Click here to download a 2 page CV – or read below to learn more about my work over the years.)

I serve as a board member of Khoj International Artists’ Association. I have been a TED Senior Fellow (2018) Yale World Fellow (2014), a World Economic Forum Young Global Leader (2014), and a Utrecht University-Impakt Fellow (2012).

Most recently, I founded and ran the Godrej India Culture Lab, an award winning experimental ideas space, from 2011 to 2021.  The lab was a unique public space that cross-pollinated people and ideas from across academia, business and the creative industries to explore the textured nature of Indian modernity. The Lab engaged with multiple audiences via events, installations, screenings, performances and digital projects. It also conducted student leadership programs and fellowships, produced white papers and mapping resources and powered collaborations with other national and global cultural institutions. I also worked on other Godrej projects dealing with human capital and innovation. In 2012, I helped conceive Godrej LOUD, a unique MBA campus recruitment drive that funds the personal dreams of students alongside their internships. From 2014, I served as the curator of the annual Godrej Leadership Forum, a conference for senior management across the Godrej group, and between March 2021 and September 2021, I led the strategic reboot of the group’s diversity and inclusion agenda.

Earlier in my career, I worked on new media, venture capital and innovation for Mahindra & Mahindra. My other work experiences have included founding India’s first youth website, heling conceptualize and manage research for the Convergence Culture Consortium at MIT, business development for Sony‘s Indian television channel operations, writing and editing copy for Elle magazine and the Times of India group and helping make a low-budget feature film.

I have two Bachelors degrees from the university of Mumbai – in Commerce and Education, a film diploma from the Xavier’s Institute of Communication, Mumbai, and a Masters of Science in Comparative Media Studies from MIT.

I often present on different aspects of creative and corporate India at forums like INK Women, Women in the World India, Names Not Numbers, Lakme Fashion Week, Society for Human Resource Management, Unbox Festival India Art Fair, the World Economic Forum on Africa (Cape Town), Nokia World (London), Next Media (Banff, Canada),  XMedia Lab (Auckland & Sydney), The Wheeler Centre (Melbourne), Brandeis University (Boston), and Digital Natives With A Cause (The Hague, Netherlands). I have also given talks at institutions like Yale University, Berghs School of Communication (Stockholm), George Washington University (Washinton, DC), IIM (Indore), IIT (Gandhinagar) and MICA (Ahmedabad). Especially after the release of Queeristan, I am often invited as a keynote speaker to talk about LGBTQ inclusion in Indian workplaces at corporations like Hindustan Unilever, Standard Chartered Bank, Bain & Company, Oracle, Publicis Sapient, Sony Networks India, and others, and at forums like the NASSCOM Diversity Summit or the annual conference of the Organisation of Pharmaceutical Producers of India.