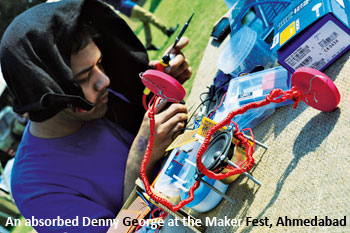 Entering Ahmedabad’s National Institute of Design (NID) on a crisp winter afternoon, I walked over a path of New Year resolutions written by a student in chalk. Over the day, after hundreds of footfalls, the words got erased slowly, suggesting the ephemeral nature of even one’s best intentions. It was poignant participatory art – and an apt welcome to the country’s first Maker Fest, that I was in the city to attend.

The event was a celebration of invention, creativity and resourcefulness, a place to meet and interact with innovators from all over India. Inspired by the Maker Fairs that are now held across America, Europe, Africa and Japan, among other countries, the Ahmedabad Maker Fest was part innovation fair, part art show and part celebratory festival. The exposed-brick Gautam Sarabhai-designed campus was such a perfect venue! The beautiful architecture and the NID students’ energy added to the excitement of all the visiting innovators.

It was great fun to observe the incredibly cool Sam Pitroda enjoying the Maker Fest alongside my visit. I loved how encouraging he was to the young innovators that thronged him and how patiently he answered all their questions. Can someone tell me why we don’t have him as our country’s president?

I walked around with my friend (Firaaq screenwriter and University of Auckland professor) Shuchi Kothari. Together we saw inventions like the Rancho scooter that was highlighted in the film 3 Idiots, gobbled up some delicious Dharmaja’s Cupcakes (these are the best I’ve eaten in the world, I swear! Visit www.facebook.com/dharmaja.cupcakes to order a batch to be delivered to you, all you lucky Amdavadis!) and watched with delight, a puppetry performance featuring 3D printed puppets that were being manipulated by traditional Gujrati puppeteers. Shuchi and I managed to gather a small crowd ourselves when we stopped to pose thoda sa provocatively in the Saavaj vehicle on display. “Go ahead, kiss. I’m from Canada!” urged one of the gentlemen who surrounded us, rather hopefully!

Check out www.evomo.in – where you can learn more about the vehicle we posed in. Abhinav Kumar, the innovator behind this vehicle has travelled across villages in North India and Gujarat to understand the ‘jugaad’ phenomena and mobility requirements of the rural poor. Evomo which is in short for Evolving Mobility, is his start-up, incubated at NID Ahmedabad where he and his team is working on sustainable solutions for rural areas, and it was just one of the many examples of ingenuity I witnessed at the Maker Fest.

It seemed that every second person at Maker Fest Ahmedabad had made a 3D printer of his or her own! Just as mobiles helped us leapfrog into the telecom age, India is soon going to undergo a low cost 3D printing revolution, and I was excited to see evidence of this revolution on display in Ahmedabad. Other innovators I encountered included Paril Jain, a student of Nirma University, who had created an automated, programmed wheelchair, and the 20-something Susant Pattnaik, who has an enviable list of achievements that includes being featured in the investors list of MIT, addressing groups of students at IITs and founding nearly half a dozen companies to market his inventions. Susant has focused a lot of his inventions on improving the overall quality of life for the disabled; one of his breakthrough inventions being the use of a wheelchair for the paralysed, that operates on breath sensors.

However, the Maker Fest was not just about engineering and tech cleverness. It was also about crafts, the handmade and analogue ingenuity. I was so pleased to encounter Mansukhbhai Prajapati’s Mitti Cool team once again. (They make low cost clay refrigerators, frying pans and more – see https://mitticool.in/). I was also delighted to see that my Mumbai pop up collaborators Amit Nambiar and Akshay Kore had brought their cardboard furniture idea OLap to Ahmedabad. And it was great fun to hang out with the cheery Sanvar Oberoi after I saw him at INK some months ago. Sanvar is a first-generation agricultural entrepreneur who is reinstating hemp – a super crop long marginalised for its association with cannabis (that would be weed, to you and me). Sanvar’s Bombay Hemp Company works with the government, local industry and farmers to manufacture innovative agro-products for pharmaceutical, construction, energy, paper, food, textiles, and more.

What I loved seeing the most at the Ahmedabad Maker Fest were the kids that thronged the venue – both as participants as well as visitors. Take Angad Daryani for instance, a 15 year-old homeschooler who has been called a number of things on different occasions like ‘child prodigy’ or ‘genius’, but who likes to describe his own self with just one word – maker. Angad’s DIY kits company Shark Kits, provides open source kits for Indian enthusiasts at reasonable prices. He is the inventor of the Virtual Brailler, a device that converts digital text from Roman to Braille in real time to give tactile Braille feedback to the tracked finger of a visually challenged person. See Angad’s website (https://www.angadmakes.com/ ) that also features his TEDx Gateway talk if you want a jolt of inspiration right away.

Or take Aditya Sekhani, a 10th standard student from Ahmedabad’s Riverside School (Kiranbir Sethi, take a bow), who confidently showed me his multiple inventions when I dropped by his stall at Maker Fest. They included mouse gloves, portable heaters, a chair made of waste plastic bottles, and more. Tomorrow’s India is hacking its way into the future, and these young enthu Adityas and Angads that are sprouting all across our country now will become the thought leaders of tomorrow.

Hats off to Asha Jadeja for organising and funding this unique event. Asha and her husband, the late Rajiv Motwani, were for years the centre of Silicon Valley’s start-up scene. Rajiv was mentor to Larry Page and Sergey Brin, the founders of Google, and he sat on the Google board, besides those of many other companies. After his death in 2009, Asha decided to amplify his innovation message in India, through both institutional donations (such at the building in Rajiv’s name at IIT Kanpur, his alma mater) and efforts for widening the innovation ecosystem like this Maker Fest. As Asha told me in Ahmedabad, such kinds of fairs are filled with ordinary people who are just making things at home — and when they get the chance to share their projects and find collaborators, great new products and companies emerge.

While Maker Fests are annual events, there are also more permanent Maker spaces that are emerging across India, serving as hubs for the nascent Maker community. Asha and her team are helping create one such space – a Fab Lab (fabrication lab) at CEPT in Ahmedabad, which will have fabrication equipment worth several lakhs that anyone can go and use. In Mumbai, a consortium of people including young Angad, Vaibhav Chhabra and Tushhar Saigal have created the Maker’s Asylum in Bandra East. The future is going to be written in these spaces so watch them really close, or better still, join one yourself!