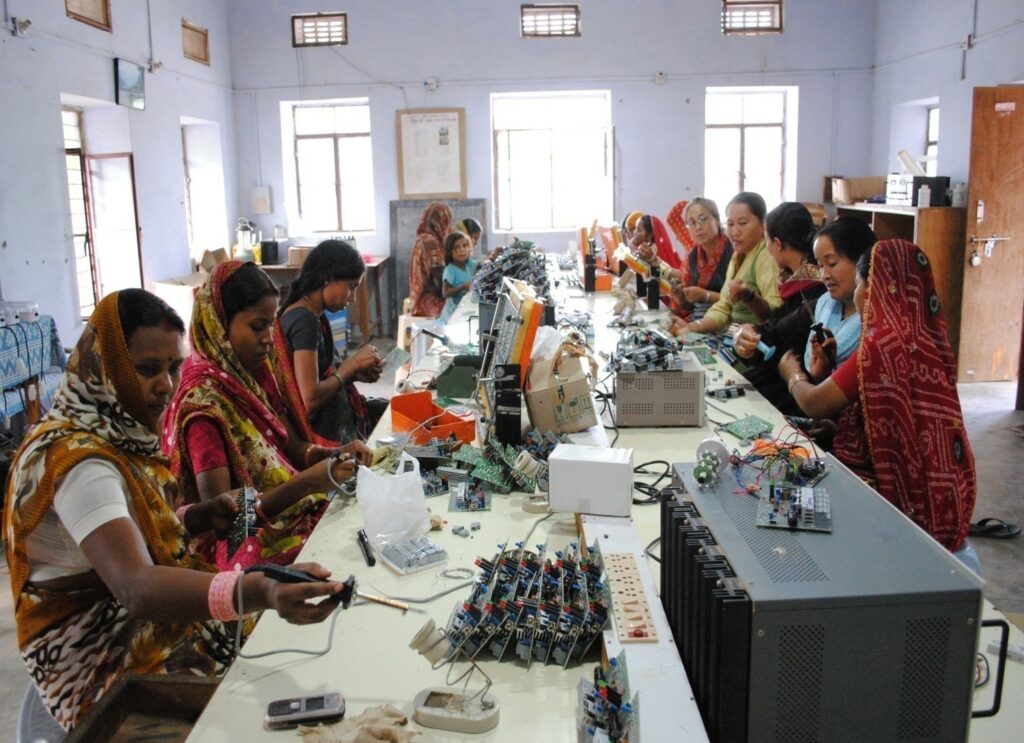 I have mixed feelings on our country’s 68th birthday. Certainly, there’s relief at having made it so far in a world going madder day by day. All around us, as airplanes fall from the skies, missiles fly into children’s playgroups unabated, and the cycle of rape and violence chugs on, at least we’re in some way, ambling along creakily, warts and all. But one also feels regret – for a national life unlived, and for critical choices that one wishes one could unmake. How does one hope for a future that is brighter than the present when one is constantly so weary and pensive? An encounter with Bunker Roy serves as a personal jolt of adrenalin.

Bunker is quite simply, one of the most inspiring Indians you could ever hope to meet.

Educated at Doon School and Delhi’s St. Stephen’s College, Bunker would have had a had a regular privileged career had he not visited Bihar post the 1960s famine and witnessed the abject suffering of the rural poor there. In 1971, Bunker created what is now called the Barefoot College in Tilonia, Rajasthan as his attempt to find a workable solution, and since then, the institution trained more than 3 million people in acquiring skills they can use to generate income and respect for themselves.

The college’s methodology is radical. They only take illiterate and semi-literate people, often from the lowest castes, and from the most inaccessible villages in India, and transform them into water and solar engineers, architects, teachers, doctors, IT workers, accountants, teachers, and other professionals. These barefoot experts then go on to transform their own village communities as catalysts of change. The college is Gandhian in its approach, with everyone eating, sleeping and working on the ﬂoor and it does not grant any paper degrees. It instead values traditional and local knowledge more.

Tilonia today has its own telephone exchange, speed post office, and 6 solar powered plants – it is the only fully electrified campus on India. They have community radio, their own dentists, acupuncturists, physically challenged pathologists, and much more. It is a dream world, his home, and Bunker who was named by Time magazine as one of the 100 most influential people in the world, talks about it with visible pride and satisfaction.

When Bunker speaks, people really listen. He rarely gives lectures these days, so I am delighted when he accepts my invitation to speak in Mumbai. At his talk at our Culture Lab, the audience hangs on to every word. About his barefoot architects who have revived the Mughal era Korseena dam that now directly and indirectly benefits 100 thousand villagers and 200 thousand livestock, at a cost of just 18 lakhs for the whole project. About the children’s parliament in the barefoot night schools, all of who elect their own female prime ministers. About the first barefoot architect who built the Barefoot College at the cost of $1.50 a square foot. (Even though this architect never went to college, the building hasn’t collapsed yet, doesn’t leak, and the architect used local material and local labour.)

About his programs in rooftop rainwater harvesting  in schools all over the country that are collecting millions of liters of water. About low cost sanitary napkin making projects. About the army of women barefoot solar engineers he is training across India and the world including in 34 of the least developed countries in Africa, 14 in South America 11 in Asia and 7 in the south Pacific. “I take only illiterate rural grandmothers, who haven’t stepped out of their villages,” says Bunker,  “and we train them into excellent solar engineers who then return to confidently electrify their villages.”

I ask Bunker about being married to Aruna Roy – herself a high profile RTI activist and Magsaysay Award winner – and he tells me that they have been married for 44 years, fight regularly, and support each others work, even though their styles are very different.  A short and succinct recipe for a happy marriage – I store it in mind for the future.

Far away from Tilonia, and on a much smaller scale than Bunker, but as importantly, my friend Karthik Vaidyanathan is empowering a bunch of craftsmen from Channapatna to tweak their traditional eco-friendly wood craft work into a new aesthetic, and to find new markets and appreciation.

Channapatna is a small town between Bangalore and Mysore. Karthik’s Varnam label now has 75 products – toys, jewelry and home accessories, all made using the unqiue lac-turnery technique from Channapatna. This is a process followed by skilled, mostly women local artisans, who shape and paint their wooden creations by hand, using age-old skills, that give them their unique smooth round proportions. Karthik’s designs have won awards from Kyoorius and CII for their excellence. More importantly, he has helped revived the craft of lac-turnery from its Tipu Sultan era heyday into something that is cool, trendy and that its craftsmen can continue practicing with pride.

Bunker and Karthik are remarkable individuals, but there are many others like them. People who are passionate about their work, about our India, about honouring local skills and crafts and knowledge, and about moving into the future with confidence. I’d personally like to enter another year of Indian independence by celebrating their spirit, instead of being cynical or absorbing the negativity that we see all around us on TV.