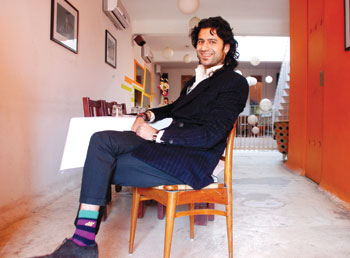 On a foggy night in Delhi, at about 10 p.m., I am making my way through the curvy alleys of Hauz Khas village for a unique dinner organised by the new designer collective After Hours. It has taken me 12 hours to get to this city because of the bad weather. As I was hastily getting dressed in the car on my way from the airport, the thought crossed my mind that flying to London might have actually been quicker today. Now, I squint my eyes in the swirling haze; Kalyani Chawla and Malini Ramani shriek while eerily emerging from the shadows ahead and point me in the right direction of cocktails (at the store), but before I can check it out properly, I am waylaid by a long procession of shawl-wrapped jewellery-bedecked guests raucously swaying towards TLR – The Living Room Café – for the sit-down dinner, wine glasses in hand. The party animals are regarded with quiet amusement by the villagers they pass by. Sometimes, when worlds collide, there is no big bang, just silence.

Inside the restaurant Rakesh Thakore, Kevin Nigli, Maithili Parikh, Alpana Bawa, Sujata Assomull, Nalin Tomar and others have sprawled themselves across six tables, each of which has been magically decorated by one of the After Hours designers in his or her own signature style. Tablecloths, plates, napkins, candles, flowers…everything. So Peter D’Ascoli’s has pretty-pretty hand embroidered floral tablecloths, Aneeth Arora’s table is in minimalistic earthy khadi while Mayank Mansingh Kaul’s has an abundance of his signature gold gota flowers. As the dinner courses begin to flow and the conversation sparkles, TLR owner Gautam Aurora puts on an oversized Mexican straw hat and starts thumping an electric guitar round his neck. Hauz Khas village is so back to being the epicentre of Delhi cool.

The village is adjacent to an ancient water body (‘Hauz Khas’ means royal water tank) and a complex of historical monuments, some of which can be traced back to the 14th century. It had its first round of fame in the late 1980s when Bina Ramani led its metamorphosis from sleepy hamlet to ethnic chic central. The first wave of boutiques, cafés, galleries and nightclubs like No Exit and Bistro ushered in the country’s era of post-liberalisation conspicuous consumption. Then came the lull, and stagnation, due to over-commercialisation. Delhi locals moved on to the next ‘it’ thing and Hauz Khas became a tourist trap, to be visited in combination with dinner and deer-watching at the Park Baluchi next door. Perhaps ethnic chic seemed passé in an age of foreign brand frenzy and glitzy destinations like Emporio.

Meanwhile, life continued as always in the village. The small lanes with their old shops selling authentic old film pictures and posters, silver jewellery and leather, survived, as did a few old designer favourites like Ogaan, or Nalin and Kaka’s Krishna antique textiles. Most of the others shut down.

Suddenly in the past year or so, the buzz has begun to return as a new wave of entrepreneurs has moved into the village. A happening place needs a lot more than just shops or restaurants that stay open. Those are just physical structures. It needs the avant garde to claim it as its own. These are the people who act like lightening rods, serve as catalysts for cool, and soon a domino effect takes place. The vanguard is usually made up of mad people, the kind Kerouac would recommend inviting to a dinner party because they would be ‘the ones who are mad to live, mad to talk, mad to be saved, desirous of everything at the same time, the ones who never yawn or say a commonplace thing, but burn, burn, burn….’

These would be people like Gautam, who left his corporate job and life in London after one chance encounter with a girl at a Delhi party. Gautam grew his hair long, became a musician, fixed upon Hauz Khas, set up the Living Room Cafe, married the girl in question and created a beautiful daughter, all in the space of about a year. I watch him swaying his gigantic-hat-wearing head to the beat and urging us all to have some dessert. He looks beautifully content. Tonight is mellow by TLR standards. Event nights here usually tend to include some combination of bands jamming, film screenings, book discussions, political talks, rap, burlesque, poetry and dance. Still, I have such a good time that I decide to camp out in the village for the majority of my Delhi trip, except for two tiny detours to Gurgaon and Noida for the Devi Art Foundation’s Pakistani artist show and Kiran Nadar’s foundation launch respectively.

I meander through the alleys of the village the next morning to seek other Hauz Khas avant-garde specimens. The ones I locate have two similar characteristics. First, they have all created cultural spaces based on ideas they are passionate about, spaces that are now collectively and collaboratively (since everyone is friends with everyone else in the village) creating a revolution in Delhi’s urban culture at large. Second, they all look mad and fabulous.

I finally get to see After Hours properly in the daylight. Peter D’Ascoli and Himanshu Shani of 11.11 make for interesting coffee companions on the third floor of the store – Peter with his prim New York design sense and Himanshu with his macho-meets androgyny vibe. I love the fact that there are no mannequins in the store or middlemen in the retail process. The six designers are pooling together their resources and creativity to control how their edgy creations are presented and sold and their ambitious plans ahead include capsule collections in other cities inside and outside India.

For lunch, I hop, skip and jump (past a gigantic garbage dump and crumbling walls) a few buildings away, and climb up three floors to Gunpowder, the 30-seater restaurant that’s created a strong buzz since its opening some months ago. Word-of-mouth publicity has ensured that there’s no need of a signboard. Owner Satish Warier (former web journalist) is cooking up a storm in the open kitchen while his waiters unhurriedly take orders. I wolf down plates of sweet-and-sour pumpkin, avial and toddy shop fish, accompanied by fluffy appams, crumbly Malabari parathas and tamarind rice. Bliss.

Once the crowd dissipates, Satish joins me for a post-lunch beer, while his boys gather round his laptop in the kitchen to see a pirated version of Pyaar Impossible. (I am glad they were enjoying it, otherwise I was beginning to think that I was the only person in the world who loved it. Mark my words, just like Tashan, Pyaar Impossible too is going to be a cult classic in 10 years. Uday Chopra will then finally redeem himself.) Incidentally, Satish also manages a rock band for fun, but he could totally be a rock star himself, especially when he crosses his long distressed-leather clad legs and leans back on a plastic chair to light up a cigarette. Soon we’re joined by a bunch of his friends – Ayesha Mohan, who played the lead in Anurag Kashyap’s Gulaal, gives us a preview of a short film she’s just directed. Smitha Singh Rathore from 11.11 expounds on tentative plans being discussed among the village association to organise a Hauz Khas festival on the lines of Kala Ghoda in Mumbai. When former Maxim editor Anup Kutty leaves to head back to the Mob magazine office, I follow him, intrigued. Mob magazine?

I find a mini youth revolution being planned within the stark, gleaming 1500-square-foot space, while the Mob radio channel on the magazine website plays current hits from the Indian indie scene like Shor Bazaar’s ‘Savita Bhabhi’ and Mrigya’s ‘Ganga’. To me, the magazine that Anup and his team are trying to create sounds a little bit like Tank, a little bit like Nylon and a little bit like The Onion, accompanied with all the multimedia and social networking possibilities that Web 2.0 has made almost mandatory globally, but which, shockingly, very few local media properties have been able to tap. As I go over the Mob website with Anup, I am drawn more to their custom-created content, such as the video they shot at the McDonald’s outlet in Lajpat Nagar, with the cast of the Delhi production of the musical Hair singing and being stopped by the security guy. Priceless. Other stories that I like are the interview with Dan Reed, the UK film-maker who made the Terror in Mumbai documentary, and a fashion photo-essay called ‘Mane Road’, shot by Parikhit Pal and styled by Rin Jajo, which showcases, sartorialist-style, cool hairstyles of random men from the streets of Delhi.

The sunlight has faded away completely by now and I have just enough time to pop into Arpita Das’ charming little Yodakin bookstore before it shuts for the night. I’d first encountered Arpita five years ago, while looking for a publisher for my book, and come away moved by her passion and commitment to independent publishing. I see that the commitment has intensified with Yodakin, where she stocks titles from not just Yoda Press, but also other Indian independents like Left Word, Blaft and Women Unlimited. Arpita has wisely decided to ban multinational publishers from Yodakin’s shelves, which is a good thing because otherwise, I would never have been able to assemble a list of all the independently published books I ought to have received on Valentine’s Day, but didn’t.