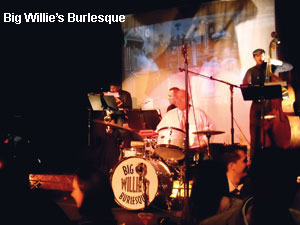 In Los Angeles, my friend, the multiple-Emmy award-winning Richard Cardran, has decided to throw me a party at his spectacular Echo Park hillside home. Richard is my type of person – a background in physics and some wild times as a photographer at Andy Warhol’s factory were only the start to his crazy life as a writer, artist, serial entrepreneur and digital guru. We instantly connected as co-panellists at a media conference in New Zealand, and now, here I am, visiting him across some oceans and a continent or two.

His friends are even wilder. Austin Richards walks in early peering through a new pair of ultraviolet binoculars that he’s designed. Austin’s day job is in the field of infrared and ultraviolet imaging, but at night, superhero like, he morphs into Dr. Megavolt – the world’s leading Tesla coils artist. Now, I know all my Verve readers are totally clued into science, but for the teeny-weeny percentage of you who just went “Huh?” – Tesla coils are high voltage devices that shoot visible electricity into the air. Dangerous? Yes. Cool? Absolutely. Austin’s obsession with these coils began as a child 30 years ago. While he was at UC Berkeley in the ’90s, he first built an eight-foot-long coil, then a metal cage, and finally a bodysuit that he could wear while the coils generated huge amounts of electricity all around him. Thus Dr. Megavolt was born. Today Dr. Megavolt is invited to perform all over the world with his Tesla coils that generate 40-foot high electric arcs over his body. In this he is sometimes joined by his wife (Mrs. Megavolt, naturally!) a fire spinner, whose fire poi attracts the arcs from Dr. Megavolt’s coils. A totally electrifying couple!

Suzanne Stefanac, Director of the Digital Content Lab at the American Film Institute seems to like my San Pelligrino Orange-Absolut Mandrin cocktail that she sips in Richard’s outdoor Tiki lounge. Meanwhile, Von Dutch label founder Tonny Sorensen is hanging out in Richard’s study, fondling the multiple Emmies. Tonny has quite a nice award collection himself, having been an Olympic athlete and World heavyweight Tae Kwon Do champion in the past. Today, he’s telling me of his new venture that he’s totally immersed himself into after easing out of his Von Dutch responsibilities. It’s an online-offline creative space called Planet Illogica, which has been conceived as a hub for artists and businesses to interact. The website is a resource for any type of artist, designer, chef, writer, musician or performer to showcase their work online, and Tonny and his team are constantly creating events and opportunities for the growing planet Illogica collective to collaborate between each other, as well as on commercial and corporate projects. It’s a niche social network, and I’m eager to see how it does.

I’m so glad I’m seeing a different side of Los Angeles. Previous visits have usually followed the same script, more or less: an overview of chic city life from the rooftop bar of Balzac’s Standard hotel, check, Rodeo Drive shopping, check, Beverley Hills socialising, check, Santa Monica time-pass, check, paying homage to the hot guys at the Abbey in West Hollywood, check. This time round, I experience a more mellow vibe, spending most of my time eating divine chicken tamales (freshly made by the Mexican family owned and operated Mom’s Tamales) and chilling on the Eastern side of the city, within the anime-style graffiti covered old warehouses and former railroad buildings that comprise the hip Arts District.

Still, you can’t keep a party boy away from the scene for too long, so when night falls, I saunter into the recently opened Edison, LA’s latest nightclub, into a fantastic subterranean world of spot-lit boilers and vintage machinery (the club used to be a power station). The dress code is formals only, and all around me are suited men, and bejewelled, cocktail dress wearing women, surrounded by winged absinthe fairies rolling carts laden with alcohol potions, 1920s silent films projected on the walls and acres of velvet, gilt chandeliers, and low-lit opulence that makes recession seems like an alien concept. Presiding over the scene on an elevated stage is Big Willie and his jazz band, with bouts of some extraordinary burlesque.

As a performer whips off her glove while cooing into Big Willie’s ear, and the crowd around me jostles to get closer to the stage, I remember how three days ago, I was being jostled in very different circumstances at the Metallica concert in San Jose. There, I’d lined up with thousands of fans in the cold rain outside the ‘Shark Tank’ (the city’s main stadium, home of the San Jose Sharks). The lines snaked across a few times around the HP pavilion, and the audience was in ‘high spirits’ even before the show began. Inside, die-hard fans slammed into each other in the mosh pit right next to the stage, even as spectacle-wearing potbellied dads (many of whom had come to the concert with their young bewildered children) head-banged in their 500-dollar seats, while clutching on to their beers and hot dogs. Metallica’s not really my thing (except for the live version of ‘Nothing Else Matters’), but the lasers, multi-coloured pyrotechnics, spinning lights and gigantic balloons make the show one of the biggest spectacles I’ve witnessed.

The most fun is in seeing my school friend Rommel, whom I’ve accompanied for the concert, head-banging right next to me, to all his favourite classic Metallica tracks (Master of Puppets, Sad But True) as well as the new ones from the latest album Death Magnetic. Is this the same Rommel from seventh standard? Yes, but now, he is also a daddy and the next day, he proudly whips out his camera as his two-year-old daughter (and my new friend Diya) jumps on a carousel ride that we’ve chanced upon in the city’s downtown. I have flown to the west coast after attending a baby shower for my college friends Aswin and Mandira in Ann Arbor, Michigan. Sitting at the breakfast table over miso-smoked melt-in-the-mouth salmon with Aswin and a very pregnant Mandira (baby Ameya arrived some days after I left), or with Rommel, Gayatri and an egg dribbling Diya, I mull over the fact that all my friends are starting their own families. What about me? Will I get left behind? Not that singledom is bad. Still, who doesn’t want to find someone to love (someone who will stay and not leave you), and live one’s life for the future of one’s children? Evidently, I am boringly, conventionally heteronormative. But I am not allowed to feel melancholic for too long. There is a Lebanese lesbian book reading at Berkeley to go to. Artisan beer and oysters to be had in Chicago in sub-zero temperatures. Airport terminals to navigate, and planes to catch, George Clooney like (Seen Up in the Air yet?). No time for pity. Only serendipity.

On my way back across the country, my plane runs into the worst snowstorm ever seen on the East coast of the US, and stops in Dallas. There will be no flights out for at least two days. Dallas is a city I’ve never been to, or wanted to go to. Boredom stretches out like a wide Texan highway. But there’s something to be said for desi-style bigheartedness. Within an hour (five minutes of phone calls to friends telling them of my predicament, and 55 minutes waiting time), I’m picked up from the airport and whisked off for a shawarma diner with Sachin Bhatia (a friend of a friend) and his gang.

Just like Dr. Megavolt from LA, I discover that Sachin has two sides. Daytime Sachin is a systems analyst with a respected software company. But at night, when the world is asleep and bats awaken and skunks start roaming on the Dallas highways, Sachin morphs into a Curry Smuggler! His partner in crime is his New Jersey-based brother in law, Paresh. Together, they wreck havoc on the internet. This is havoc of the good kind. Curry Smugglers is the name of Sachin and Paresh’s weekly podcast (see: https://currysmugglers.com) that zoomed up the popularity charts in its first season in 2009. Season two has just begun and from the segments that I hear, these Smugglers could be on to something big.

Here’s why. First, they’ve found a very specific niche – Desi progressive music – which comprises underground music, Bollywood DJ remixes and an occasional smattering of some Punjabi bhangra. This is a niche that not many have tapped well on the internet; the majority of desi podcasts tend to be Bollywood only. Secondly, the research behind each show is painstaking, the Smugglers have a wide network that they scour religiously to find obscure and emerging desi DJs from all over the world. Thirdly, their banter is spontaneous and funny; some of the episodes in season one had Paresh visit India and try and uncover a curry smuggling racket taking the help of a Mumbai paan wallah. Silly, but very good fun to listen. Finally and most importantly, the show quality is professional grade. Before they began their podcast, Sachin and Paresh scanned radio stations as well as other podcasts on the internet to see if there was a place that had the music they liked. Since they didn’t find one, they decided to build one themselves, and because their show is good, it’s accumulating an audience, and who knows, tomorrow, it might well transition into a regular show on the US radio market, in other parts of the world where their podcast is popular (the Middle East, Pakistan and the UK) or even here, within India.

I am also very interested in how people connect to culture and notions of home even though they may be thousands of miles, and many years away from physical contact with the homeland. While chatting with Sachin, who hasn’t been to India for more than a decade (he grew up in Dubai and then studied in the US and stayed on to work there), I realise that there is a deep knowledge of and a desire to connect to Indian culture that extends beyond the popular. Whether it is about the state of South Asian rock (lamenting the low commercial visibility of bands like Faridkot, Indian Ocean and Parikrama; being enthused by new bands like SuperFuzz, Them Clones, Avial and Another Vertigo Rush, and shows like MTV India’s Rock On) or songs he’s currently tripping on (Sajda from My Name is Khan, the Electro Groove series by DJ A.Sen, David Guetta, Eric Prydz, Bilz & Kashif, Imran Khan, etc), his passion and commitment to the genre is as intense, if not better than DJs or RJs from India that I’ve encountered.