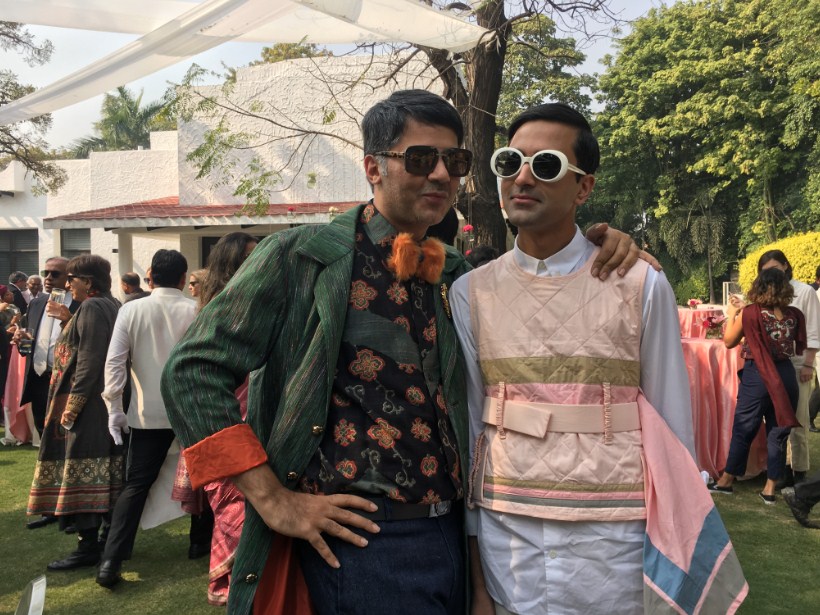 PARMESH SHAHANI REFLECTS ON LOVE IN THE TIME OF HATE

From art and fashion to social activism, young people the world over are rising up to challenge mainstream narratives and offer optimistic alternatives, says Parmesh Shahani

As I walked in the Mumbai Pride Parade with 14,000 people, I felt a tremendous surge of gratitude. For the tireless organisers. For the police protecting us. For the bystanders cheering us on. For the 200 students from medical schools across the city who were marching with us (These are our future doctors; and how incredibly inclusive they are going to be!). For the Pink Singers choir members who had flown in from London to sing for us. For all the mothers walking under the ‘Moms For Equality’ banner.

For the fact that this was the first disabled-friendly pride march in Maharashtra, with ramps for wheelchairs and sign language interpreters on stage. It was a heady feeling to be immersed in this sea of humanity marching for truth, freedom and love.

So often, when we put on our TVs or read newspapers, we are consumed by negativity. It is vital to recognise that there is also tremendous good taking place. My friend Nusrat Durrani had flown down from New York, where he is a global media rockstar. Walking in Mumbai Pride was just the boost he needed in the ‘post-Trump-post-truth-alternate-facts’ world he’d boarded his flight from. #ItGetsBehtar was the slogan of this year’s Pride, and it indeed does. Positivity. Hope. Love. “Especially love, in times of hate, is what we will need to get to the other side,” Nusrat asserted, as activist Harrish Iyer sashayed past us in his glam nauvari sari, megaphone in hand.

‘Love in a time of hate’ also happened to be the title of the masterclass Nusrat gave at our India Culture Lab during his Mumbai sojourn. He showed our packed audience of 400 people excerpts from his acclaimed MTV Rebel Music documentary series shot in countries like Afghanistan, Mali and Mexico, that featured local youth activists fighting for change. He also gave us a glimpse of Madly, his omnibus film that was selected to open the 2016 Tribeca Film Festival in New York, for which Radhika Apte won the Best Actress Award in her Anurag Kashyap-directed segment, Clean Shaven. “All over the world, despite political turmoil,” Nusrat declared, “millennials are creating narratives about crossing divisive barriers and finding connections.” When will the powers that be — political, or otherwise — acknowledge this shift from hate to love?

Recognising the connected tissue that binds us all is what the ongoing Kochi Biennale does really well. Sudarshan Shetty’s curatorial note titled ‘Forming in the pupil of an eye’ recounted a tale of the recognition that formed in an instant between a sage and his new student with just a glance, about the multiple realities
and possibilities contained within the universe.

Shetty has assembled 97 visual artists, architects, poets, musicians and performers from 35 countries and has curated a haunting festival of resistance. Together, this multitude of global voices evocatively speaks up for diversity, inclusion, justice and plurality; for the ties that bind us all as sentient beings against the divisive forces of fascism. It is a moving experience and I strongly recommend that you go see it before it ends this month.

I wept while walking through Slovenian poet, novelist and essayist Aleš Šteger’s cow dung Pyramid of Exiled Poets, and once again while wading through Chilean poet Raúl Zurita’s Sea of Pain — his memorial to the five-year-old Syrian refugee child Galip Kurdi, and after that, stopped noticing whether the tears were there or not. The work flowed over me, and I, into the work.

What was also very special this year was the provocative Students’ Biennale, showcasing work produced by children from 55 government-run art schools. The past two years have been particularly intense for our students across India. From Hyderabad to Pune to Delhi, they have resisted authorities who have attempted to clamp down on their rights. The works, spread across Matancherry and Jew Town, collectively sparkled with humour, strength and resilience. Love in the time of hate!

While Shetty’s biennale was much more expansive in its reach and scope, this time’s India Art Fair was more contained than previous editions. Our Lab was happy to present the fair’s film programme this year, with curators Avijit Mukul Kishore and Rohan Shivkumar. We decided to focus on films made either by or on Indian artists, and screened old gems like Tyeb Mehta’s Koodal and new ones like Kamal Swarup’s film on Atul Dodiya.

Art Fair week in Delhi means major socialising. This time round, I particularly enjoyed the beautiful Christie’s lunch at Kiran Nadar’s home to welcome Boon Hui Tan from Asia Society New York, with Mumbai gallerists Priya Jhaveri and Tara Lal by my side, admiring MET curator Shanay Jhaveri’s wardrobe — a work of art itself. Why don’t more men dress up fabulously in this country? I’m going to suggest a booth dedicated just to Shanay’s fabulous looks at next year’s edition!

As always, Khoj inspired. From 2010 to 2014, the artist collective has supported 19 site-specific artistic interventions across India, which addressed issues around public art, ecology and community. Evidence Room, their current show, is a living archive of the results of these interventions. Pooja Sood and her team were positively radiant at their lunch, and why not — they have succceeded against all odds in creating the most exciting discourse around art in the country.

Right across the road from Khoj, the Kiran Nadar Museum of Art created shock and awe of a different kind with its ambitious Stretched Terrains show. Just one word for the modernist feast that curator Roobina Karode had laid out for us to devour — yummy! Monumental Raza, Husain and Souza mini-exhibitions, Delhi architecture, contemporary probings of modernism — this is confident and expansive curation and you would be an utter fool to miss it, especially if you live in Delhi.

Speaking of ambitious and confident — I was once again impressed with Lakmé Fashion Week this season. Gautam Vazirani and Jaspreet Chandok pushed through a socially-conscious week with an agenda to change the status quo around beauty and fashion. I was so proud to see transgender model Anjali Lama from Nepal walk the ramp. It was great to see the confident girls from Kranti — an NGO that my friend Robin Chaurasiya started — be part of, and frame their own narrative in Mandeep Nagi’s beautiful Shades of India fashion show. Another friend — Roopa Barua — made the lovely video that accompanied their performance. It’s so good when friends collaborate!

If you didn’t know about Kranti already, they educate and empower trafficked girls, the daughters of sex workers, and otherwise-marginalised women to become agents of social change within their communities, by providing them with a safe home, education and job opportunities. Robin was a finalist at the Global Teacher Prize last year for the impact her work has created — do visit their website www.kranti-india.org to learn more about these amazing revolutionaries.

As always, our Culture Lab had its own Fashion Week intervention. This time we collaborated with the NGO Sneha, the Dharavi Biennale and the Design Museum Dharavi for a dialogue about reframing the suburb as a source of inspiration, creativity and resilience for the fashion industry. We invited master embroiderers Shaikh Alam and Mohammad Ismail Ansari to work alongside designer Jay Ramrakhiani to produce a capsule collection. It was incredible to see Alam and Ansari take a bow with the models in their wonderful creations.

Our discussion brought forth some pertinent issues — including those of language and framing. It was telling for instance, to see how many audience members referred to Ansari and Alam as “them” — preferring to address their questions to the English speaking panellists like Nayreen of Sneha or Kruti from the Dharavi Design Museum — thereby cementing further the class and language divide that we, as organisers, had hoped to blur. The grace and humour of Alam and Ansari in deflecting these comments, and in focussing on future possibilities of collaboration, is something I will always remember. Love in the time of hate. Always.