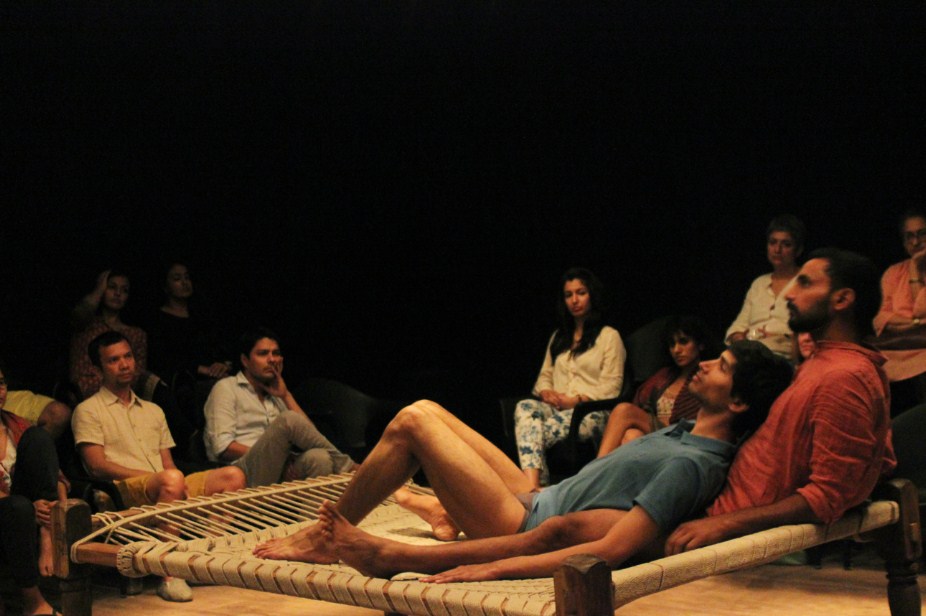 As he bids farewell to 2016, Parmesh Shahani is resolute about the future

The Lavani performance at the Godrej Culture Lab

A new year is a time for new beginnings, and I want to start 2017 with a fervent request to all of you. Speak up. Rise. Challenge. Provoke. All around the world, and indeed in our own country too, eﬀorts are being made to squash varied voices of freedom, and the right to dissent and express alternative viewpoints. Please make it your resolution to not participate in this muzzling of freedom and instead to speak your mind fiercely and passionately. As pastor Martin Niemöller (an outspoken critic of Adolf Hitler and Nazism who was sent to a concentration camp for several years) wrote so many years ago, the cost of staying silent is heavy:

So for selfish preservation, if for nothing else, you need to speak up, dear readers, and I am sure you will. It was my privilege to say goodbye to 2016 in the company of some incredibly outspoken artists, performers and writers. All of them are, in their own ways, resisting the status quo and creating complex narratives of what it means to live in contemporary India today. I greatly enjoyed collaborating with Columbia University’s Global Center in Mumbai at our Culture Lab for a panel discussion on Dr Ambedkar and his legacy. December 6 was the 60th anniversary of his death. 2016 was also the year of his 125th birth anniversary and it marked 100 years since he graduated from Columbia University, an intellectual haven that nourished him and helped him form many of his radical thoughts about caste and resistance.

During our discussion, Farah Jasmine Griﬃn, professor of English and comparative literature and African-American studies at Columbia, shared with us her research on jazz, gender, blues and culture of the Harlem Renaissance in Manhattan; a time when Ambedkar was living in New York, absorbing ideas about race and integrating them into his thoughts on caste. Robert Gooding-Williams (professor of philosophy and a faculty member of the Institute for Research in African-American Studies at Columbia) spoke of the influence of W. E. B. Du Bois on Ambedkar and the exchange of ideas between them about black and Dalit liberation. Anupama Rao (associate professor of history at Barnard College) and Ramesh Kamble (associate professor of sociology at the University of Mumbai) had a wonderful jugalbandi about labour movements and urban transformation that had led to resistance and changed the lives of so many Dalit citizens over the years.

The highlight of my evening was the multi-panel mural that S. Anand of Navayana had so generously sent us from Delhi. Called The Ganja-Mahua Chronicles, the artwork — a collaboration between Anand and celebrated Gond artist Venkat Raman Singh Shyam — explores diﬀerent kinds of love that transgress boundaries. Taking oﬀ from the legend of the untouchable Ganja and the Brahmin Mahua, it features Divya and Ilavarasan, Bhimrao Ambedkar and Fanny Fitzgerald and Archie and Parshya (the star-crossed lovers from last year’s hit Marathi film Sairat). You may not get a chance to see the mural, but do pick up a copy of their collaborative graphic novel Finding My Way if you can. It is pure magic — memoir, cultural history and much, much more. I recommend this to be the first book you read in 2017.

Speaking of books, it is that time of the year when literature festivals pop up in every nook and corner of our country. At yet another edition of the Times LitFest in Mumbai, organisers Bachi Karkaria and Namita Devidayal had me chair a panel called 50 Shades of Gender. Now, ‘gender’ has never really been a static term. Over history, it has evolved and morphed in diﬀerent ways. Today, on the one hand, there has been an attempt to broaden the gender horizon and remove all labels, while on the other, there are also attempts to drill down deeper and define the various gender identities (cisgender, gender neutral and so on). I personally find both this widening and narrowing to be rather exciting and was lucky to have the inimitable Hoshang Merchant as one of my panelists.

Neither age nor knee replacement surgery have diminished Hoshang’s acerbic wit one bit. A midnight’s child born in 1947, he has written 29 books so far — poetry, commentaries, translations, memoirs and anthologies. To Hoshang, gender is fluid and a performance too, but ultimately it is choice. Society tries to stamp its norms on us and take away this choice. He urged us to resist these pressures, just as he himself had done throughout his life.

I encountered a similar kind of resistance around the folk dance form of lavani, in the past month. Sejal Yadav, a JNU scholar from Delhi who spent the past few months at our Culture Lab and curated an incredible festival at the end of it, educated me about how much more there is to the dance than the depictions we might see in Bollywood songs like Chikni Chameli or Pinga.

Today, the subversive and political nature of lavani continues to flourish in diﬀerent forms. Consider just as one example — Agents of Ishq has produced a multimedia project called The Amorous Adventures of Shakku and Megha in the Valley of Consent; it deals with what yes means, what no means, and what maybe means, while dealing with consensual sex (Google it right now, it is brilliant!).

An interesting moment arose during the festival when one of the audience members said that since it was a Maharastrian art form, we should only speak about it in Marathi. My counter to that was that lavani may have originated from here but belongs everywhere and so perhaps we should discuss it in a polyphonic voice — Marathi, Hindi and English — and be open to possibilities?

Polyphony and openness are both qualities that the Delhi-based dancer Mandeep Raikhy and his Gati Dance Forum have been striving for in their dance practice for many years. I was delighted to host a closing conversation at the end of their Queen-Size Mumbai tour. At our panel called Private Matters — Politics and Sexuality in Performance, we spoke about how artists could use their own bodies and their performances as an argument against oppressive laws.

A performance of Queen-Size

Mandeep created Queen-Size as a response as well as a follow-up to the tragic passing in 2003 of his friend at the age of 26, the brilliant film-maker Nishit Saran. He left behind a brilliant legacy of films such as Summer in My Veins (1999) and writing, including Why My Bedroom Habits Are Your Business, an important op-ed in The Indian Express published in Janaury 2000. As Nishit argued in the piece, ‘What I do in my bedroom has to be your business my sophisticated friends….at least until we get rid of Section 377 of the Indian Penal Code’.

What does it mean, as Mandeep has done, to choreograph an extremely intimate act of two men encountering each other on a charpoy bed and making what is so private a public spectacle? What does it mean, as my fellow panelist Sonal Giani did, to wear a rainbow-flag sari and handcuffs and run the Mumbai marathon? What does it mean, as panelist Urmi Jadhav does, to change the image of the hijra community each day, by being someone who pursues excellence through the performing arts? It means everything, dear reader! It means making the invisible visible, it means standing up and being counted.

One of my most moving experiences of 2016 was lighting a series of candles in the shape of a ribbon to commemorate World AIDS Day at The Humsafar Trust, an NGO in Mumbai. I promised myself that day that I would never forget all those brothers and sisters — gay, lesbian, bisexual, transgender or straight — lovers, friends and family members that our community lost on this journey. That I would celebrate all the heroic acts, big and small, that had enabled us to survive over the years. And that I would continue to struggle alongside my fellow travellers together and joyously, on the path ahead, despite the innumerable challenges we would encounter. There will be many in the years ahead. But self-pity, self-denial and self-invalidation will be the least of them. And come what may — I will speak up for what is right, and speak out against what is wrong. I hope you find courage to do the same, dear readers. Happy 2017 to you and your families.