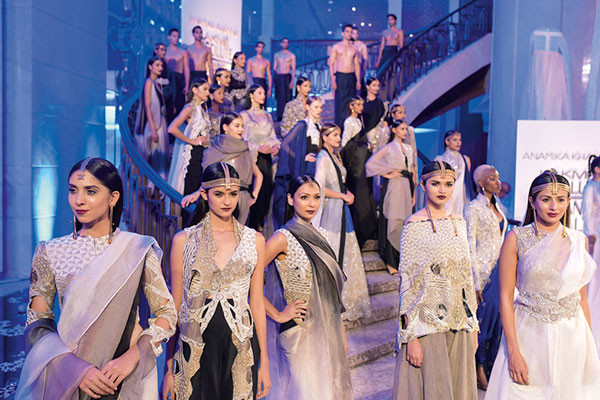 IT’S ALL ABOUT LOVING YOUR FAMILY

Twenty-five designers doing a joint grand finale is really something — and the Amazon India Fashion Week is to be lauded for kick-starting its title sponsorship with such chutzpah. But for me, the fashion moment of this season came a week earlier — the grand finale of Lakmé Fashion Week.

That afternoon, just a few hours before Anamika Khanna was due to present her closing show, the feeling was surreal. The lobby of the Palladium Hotel was in chaos. People were frantically running all around. Manish Malhotra, Tarun Tahiliani, Narendra Kumar Ahmed, Rohit Bal and others had all rolled up their sleeves, and were helping Anamika and the IMG-Reliance team cobble the show together, helping with model fittings, with choreography, with assembling a set out of literally nothing.

This was not how the grand finale was meant to be. The original plan was meant to hold the event within the spectacular 143-year-old Dr Bhau Daji Lad Museum in Byculla. The venue had been booked well in advance, a set was erected there a week ago, and rehearsals had happened on location. It was going to be the mother of all fashion events — a fitting end to the 15-year celebrations of LFW. Everything was perfect till the morning of the show, when some members of a political party gathered at the venue, tore down parts of the set and threatened the museum authorities that there would be trouble if the show continued that evening.

It is still unclear whether the protest was really against fashion (the official argument placed was that the museum should not have allowed any commercial activities within its premises as its aim was to be an educational resource) or against the museum director Tasneem Mehta, who has been has been facing flak over the years, over her controversial expansion plan for the museum. Even so, it was felt that the threat of violence was worth taking seriously and so, the show was scrapped.

Interestingly, this edition of LFW saw two other off-sites in Byculla — Sabyasachi Mukherjee’s show at Richardson & Cruddas Mills and Manish Malhotra’s at the Great Eastern Home store – both of which went off without a hitch. But for Anamika’s show, the location, choreography, seating arrangements — essentially everything had to be reorganised within a few hours. The Palladium lobby was refashioned into a seating area, the grand staircase became the ramp, and incredibly, the show did go on.

As Kareena Kapoor made her way down that difficult staircase along with the other models, all fierce and resplendent in their gorgeous metallic outfits and sharp Suhani Pittie jewels, I couldn’t help have a lump in my throat. Hats off to Poornima from Lakmé; Saket, Gautam and the entire IMG-Reliance team; and Anamika, for not buckling under pressure; and to everyone who supported them, for literally rising to the occasion. People think Mumbai’s fashion scene is all about Bollywood showstoppers but this time, the entire script was Bollywood too. With a happy ending, thankfully!

Incidentally, at my own event at this year’s LFW — a special conversation on 15 years of fashion weeks in India — Rohit Bal had perhaps presciently called India’s fashion fraternity “a slightly fragmented but closely knit” family that displays both unity and diversity in adversity. “Nowhere else in the world do people come together the way they do in India,” he said to me. It felt so strange to see him literally live out his words, two days later, while working on Anamika’s set in the Palladium lobby.

Our panel was a nice walk down memory lane. Anaita and I reminisced about how we would go to work more than 15 years ago in a shared cab. There were no stylists then, no mobile phones, and it was all about learning on the go and teaching one’s own self.  How things have grown since then — and what a bright future there is. Now, each Gen Next at Lakmé brings up a new crop of designers that enter a much more mature marketplace, and digital platforms are creating new opportunities for everyone — be it designers, magazines or ecosystem builders like LFW itself.

Anil Chopra spoke about the first ever fashion week, and how they had to take a rest day in between to prepare for the grand finale.  He spoke about the learnings over the years —about how LFW morphed the Spring/Summer and Autumn/Winter seasons into Summer/Resort and Bridal/Festive — a move that was good for designers and very good for business. About how earlier, so much money used to be spent by Indian designers to participate in shows abroad, and how fashion week organisers would spend so many resources in bringing in foreign buyers from stores like Macy’s or Bloomingdale’s, with very little to show in terms of actual orders. Likewise, Anaita remembered how earlier, foreign journalists would have special cars and escorts at Indian fashion weeks, while the Indian media people would have to figure out their own way to the shows. Ultimately though, everyone realised that the focus should be on India itself — and not validation from abroad. India is where the market is and where the influencers are.

Rohit Bal was a strong advocate for desi pride at the event. As he pointed out, our strengths in India are textiles, hand work and crafts inspired by heritage. Cultures only grow when they intermingle with each other, so there’s no harm in being influenced but according to Rohit, Indian designers had a huge responsibility towards the revival of crafts, and to use handwork and embellishments. He felt that because of fashion weeks, and because of the markets they had helped create, like bridal, there were good opportunities for Indian designers to work on keeping Indian crafts alive.

I raised the point of fashion and social issues. Designers like Rohit have often used their shows as social commentary. I remember Rohit’s from some years ago — with male models with naths, and sindoor in their hair —that questioned pre-conceived notions of gender and sexuality. I personally feel that that we haven’t done enough as a fashion industry over the years.

Manish Malhotra’s World Bank- sponsored Blue Runway show this season for instance, was quite tame. The clothes were nice enough but the models with placards saying ‘gender’ and ‘equality’ were too literal to make any real impact. In fact, a recent video featuring a Bollywood star has fuelled a million views and debates on women and choices, whatever you may think of the content and its aesthetics. I sincerely feel that we could be doing a lot more through Indian fashion to engage with issues that matter, and it needs to be understood within the longer trajectory of online resistance phenomena, like the Pink Chaddi or Kiss of Love campaigns.

Coming back to my Fashion Week panel, I cheekily asked my guests if we perhaps had too few fashion weeks in our country.  I said, our Indian way of doing things may mean thinking of fashion weeks beyond the direction-setting industry shows that they are in the West? Perhaps we might think of them as performances or consumption melas, spaces for aspiring India to articulate their ambitions and for a whole new breed of professionals — designers, stylists, models, choreographers and so on — to further their careers with employment opportunities. Shouldn’t more be merrier?

Anaita disagreed saying that a unified fashion week would make much more sense — from a purely fashion perspective. Rohit clarified and said that it would be better to call the other fashion events galas or a form of fashion entertainment but not fashion weeks. To him, the only ones that mattered were Amazon and Lakme, and he felt that they had good synergy between them. Lakméwas younger and edgier in what it offered — with Gen Next — while Amazon was more commercial.