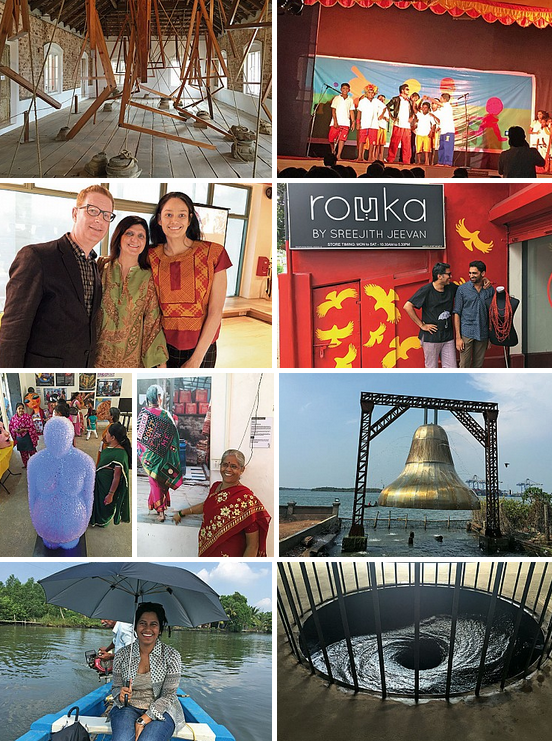 A tale of two biennales

This is a post about two biennales that I visited recently. The Kochi Biennale lasted for three months, while the Dharavi Biennale was shorter, lasting just three weeks. But between both of them, they created such incredible energy, and moments of such immense beauty, that I have been left breathless with excitement.

My favourite biennale venue by far was Pepper House, where I got to witness Three decimal points/Of a minute/Of a second/Of a degree — a sublime Bharti Kher geometric site-specific installation, made even more special by the boat views from the windows in the room that it was located in. I was also moved by Gigi Scaria’sChronicle of the Shores Foretold — a giant 2.5 tonne, 13 feet tall and 16 feet wide bell that seemed to be puncturing both time and history as it stood on the Pepper House shore, in stark contrast to the giant cranes at the container terminal located on the island right opposite. This perforated bell was installed on the eve of the biennale by individuals from the Mappila Khalasi community from Kozhikode, in an evocative performance.

There’s a lot of good design in Kochi, I must say. I spent half a day at the atelier of one of my favourite designers — Sreejith Jeevan. He is moving his Rouka brand into many exciting directions. A beautiful discovery for me during this trip was Kayal, which is a very private exclusive resort on a small backwater island, far away from civilisation. Maneesha Panicker, the owner of Kayal, quit her comfy job with Estee Lauder in New York some years ago to start Silk Route Escapes, a luxury travel consultancy. Kayal is her new project — an ultra exclusive experience with just two cottages, located on Kakkathuruthu, or the island of crows. Kayal is only connected to the mainland by water, and so to build the resort, they had to cart everything across by boat, even during the monsoons.

I was proud to host one of the Dharavi Biennale’s opening events at our Godrej India Culture Lab in Mumbai. Art historian Prajna Desai, had envisaged her Dharavi Food Project as a workshop that explored two ideas — food as art and women as aesthetic producers and creators in the food making process. She spent several months in Dharavi, working with the residents, talking to them about their relationship with food, and cooking together with them. The book that has emerged from this project, The Indecisive Chicken, should be released soon.