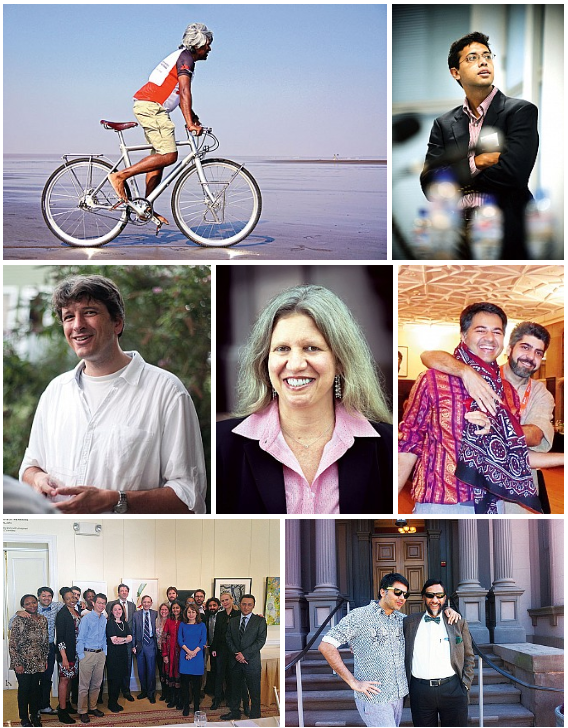 As I write this blog post, India is celebrating another Nobel Prize winner. What is there to celebrate, I wonder. We should all be ashamed of our child labour malaise – the cause for which Kailash Satyarthi has won this year’s prize – but strange are the ways in which jingoism operates. Meanwhile, I have been spending some time at Yale with our country’s previous Nobel laureate, Dr Rajendra Pachauri.

Dr. Pachauri is the chairperson of the Intergovernmental Panel on Climate Change (IPCC), which shared the 2007 Nobel Peace Prize with former US Vice President Al Gore. Scientists from across the world voluntary collaborate with the IPCC to conduct important climate research and the assessment reports that the IPCC produces are now the key global documents that measure the impact of climate change. I was very alarmed as Dr. Pachauri shared the major findings of the latest 5th IPCC report.

According to Dr. Pachauri, we can now say with 95% certainty that climate change is occurring due to human action. We can feel the impact all around us – whether it is in the rise of global temperatures, melting of the polar ice caps, the sea level rise, an increase in both heat waves as well as cold waves, and closer home, through recent disasters like the landslides in Uttarakhand and floods in Kashmir.

Climate change is already leading to loss of biodiversity, ecosystems and culture, and if the world’s temperature rises more than 4 degrees at an average, or if the parts per million of carbon dioxide in the atmosphere goes above 350 we will reach a climatic tipping point, perhaps on our way to extinction, just like the dinaousaurs before us. We might be well on way to this disaster actually – according to NASA records, the year 2014 has been the warmest year ever in history and it is believed that April this year was actually the first month in 800 thousand years that our atmospheric carbon dioxide reached 400 parts per million. This is uncharted territory.

Climate change is something that my World Fellows classmate at Yale Alexander Verbeek has committed his life to. Alexander who is who is with the Dutch foreign service has lived as a global nomad, first serving as a naval officer and then working on important landmine treaties at the Hague. I have given him the title of “reluctant diplomat”, because more than his diplomatic obligations, he is a passionate environmental crusader who travels the world, and engages with scientists, activists, CEOs of large corporations and policymakers, getting them to see the bigger picture. According to Alexander, everyone knows that there is a problem. But there is a failure in our collective imagination in connecting the dots, even though all the elements of impending disaster are evident.

So the big argument these days at global conferences is between developed and developing countries – about who should bear more of the burden of the challenge of battling climate change. We all want fast progress, especially in our country India, but as Pachauri told us when we met, quoting Gandhi, “Speed is irrelevant if you are going in the wrong direction!” In his Nobel acceptance speech Dr. Pachauri had cautioned that ultimately we have to realize that vasudhaiva kutumbakam – our universe is one family, and we need to act together.

In this regard, we need to coordinate our actions at a global level, at a national level, and more importantly, at a personal level. We need to and evolve better building material and reduce greenhouse gas emissions, and come up with solutions for the water and sanitation crises we have. Our solutions need to be both bold and large – think nuclear power, bio-power, innovative public transport, systemic changes to banking and more funding for “green tech” ventures – like solar lanterns. They also need to be small and personal – such as adopting a simple practice like not putting ice in your drinking water.

Another of my World Fellows classmates Rafay Alam, exemplifies this both-large-and-small-solutions approach. Rafay writes research papers on law, climate change, trans-boundary water, sustainability and environmental economics, teaches about the environment at different colleges in Lahore and serves on various boards of public utility companies in Pakistan, from where he tries to make a big difference. He also runs Critical Mass Lahore with his wife Aysha – a small cycling group that raises awareness about sustainable cities, the right to mobility and the right to participate in public spaces.

The operating word here is intersectionality – understanding that climate change issues are linked with issues of poverty and inequality, and when we think of solutions, we need to think of these across these dimensions. One of the organizations that has really understood this, and is in fact, operating on the cutting edge of intersectionality, is BRAC from Bangladesh which is now the worlds largest NGO in terms of the scale and diversity of its interventions, with over 100,000 employees.

BRAC operates in more than 69 thousand villages of Bangladesh and covers an estimated 110 million people. It acts as a catalyst to change by creating an ecosystem in which its community members have the chance to seize control of their own lives. They have a holistic development approach geared toward inclusion, and their methods include microfinance, education, healthcare, legal services, community empowerment, social enterprises and the new BRAC University.

It was my honour to meet Sir Fazle Hasan Abed, the founder chairman of BRAC when he visited Yale recently. Sir Ahmed, who has won awards like the Magsaysay Award and the Clinton Global Citizen Award among others, is considered to be one of the 50 greatest leaders in the world right now. He told us that he never imagined when he started BRAC in the early 1970s, that one day they would grow so big and so diverse, but they have grown, merely by being attentive to what people need.

Consider one of their most innovative practices right now – the BRAC university. How many NGO’s worldwide have actually set up a university? But at BRAC, they felt a need for this from their community and it is already paying rich dividends. The university’s climate change centre, for instance, is adapting Bangladesh’s crops for the future based on the climate changes taking place there. So they are innovating in making saline resistant seeds since Bangaldesh’s sea levels have been rising rapidly.  In a different part of the university, a mid-wifery school is training better mid-wives, with the aim to reduce Bangladesh’s infant mortality rate.

This month I also enjoyed meeting Mushfiq Mobarak, also from Bangladesh, and who is a professor in Yale’s School of Management. Mushfiq is one of the worlds leading development economists, and he works largely in South Asian countries. Through his research, Mushfiq tries to identify the fundamental sources of aversion to behavior change among rural low-income individuals, especially when it is in their own interest to change their behavior. As his research method, Mushfiq uses a process adapted from pharmaceutical testing — rigorously quantified randomized control trials in which different solutions are provided to different sets of people to see which one is the most effective.

I am going to share a little bit about Mushfiq’s toilet studies with you, as they are very important. For many years now, governments in countries like India have been building toilets to provide sanitation for poor citizens with mixed results. Often these lie unused. So why do people not use them, even when they are aware of their benefits? In Mushfiq’s randomized control tests in India, he provided a variety of options of toilet uses to different groups of users. Free versus paid versus discount voucher-driven, community managed versus outsourced to private contractors versus unmanaged and so on.

Mushfiq has concluded that in terms of effective adoption, community involvement really matters but so does providing a subsidy for usage. His work is very important for India right now as PM Modi’s cleanliness and sanitation drive rolls out across our country and I have a feeling we’re going to see a lot more of Mushfiq in India over the next few years.

I have a new personal hero in Dr Unni Krishnan Karunakara who recently retired after some very high-stress years as the worldwide president of Medicins Sans Frontieres. MSF is one of the world’s most admirable organizations. MSF doctors are often the first to enter a country and provide crucial medical assistance to people who are trapped by conflict, disasters, or disease outbreaks. Listening to Unni about his experience in trying to do good in a world that is often geared towards the exact opposite, brought tears to my eyes. Add to that the fact that last year he cycled 5,500 kilometers across India, from Kashmir to Kerala, covering 10 states, making 65 stops in 112 days, and raised over 120 thousand dollars for MSF. I have become his fan for life!

On a quick visit to Washington DC, in the midst of hanging out with World Bank chief economist Kaushik Basu, mandarins at the US State Department, think tank heads at the Carnegie endowment, and taking selfies in front of the Gandhi statue, I had the chance to meet Ashoka Fellowship founder CEO Bill Drayton. Ashoka is one of the world’s most important fellowships, and it identifies the next generation of world leaders (Kailash Satyarthi is an Ashoka Fellow incidentally), and Bill practically invented the field of social entrepreneurship when he set up Ashoka in 1980.

He spoke to our World Fellows about how Ashoka’s mission has evolved over the years. In todays world, Bill said, everyone needs to be a change-maker, and once this happens, there will be no way that our world’s problems will outrun the solutions. This new world will be both more resilient and more inclusive because each person – regardless of age or background – will play a role in shaping the future.

Ashoka’s new paradigm is empathy based ethics, and as Bill told us, adopting this paradigm can change how children grow up and learn, how cities organize for the future, how companies think about talent and strategy, how philanthropists think about impact, and most of all how society define success and development. I could write several columns about Bill’s work but I urge you to discover his change-making ecosystem – by visiting the Ashoka website – https://www.ashoka.org/.

Ecosystems are something my World Fellows classmate Vivianne is also building in Brazil. A lot of what we see in the entrepreneurship space in Brazil has Vivienne’s hand behind it, and it all began when she worked at Ashoka between 2000 to 2007. Actually, perhaps it began earlier, when Vivianne, who was trained as a dentist, ran a clinic in a low income Sao Paulo neightbourbood for ten years, and discovered the immense satisfaction one gets when one makes a difference to someone else’s life. Since leaving Ashoka, Vivianne has created Brazil’s first social business accelerator, first social impact fund, the first MBA program in social entrepreneurship and much more.