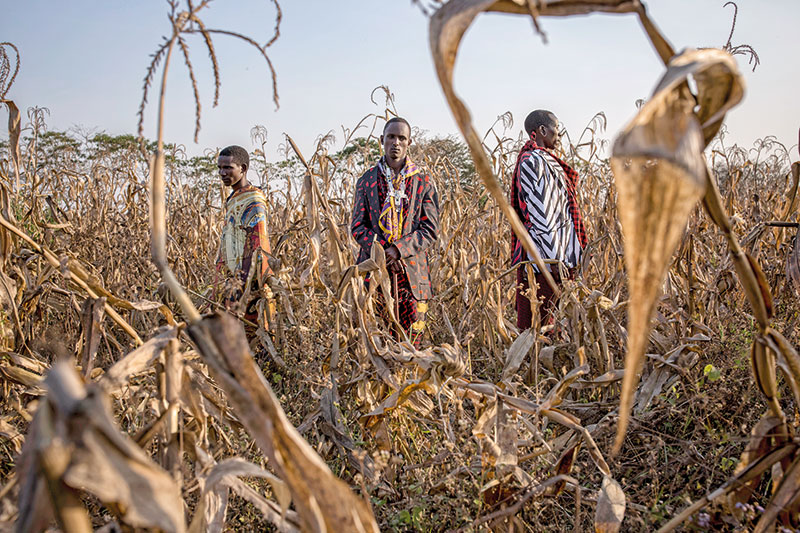 THE SAFARI OF IDEAS THAT WAS TEDGLOBAL 2017

Parmesh Shahani comes back, from Tanzania, blown away by the intensity of philosophies

As I write this column, journalist Gauri Lankesh has been shot dead in cold blood outside her home in Bengaluru, and I am programming a film screening of Velvet Revolutions — producer Nupur Basu’s powerful new film about six women journalists from around the globe, all of who have paid a high price for speaking the truth to power. Today, more than ever before, women are speaking up and making their voices heard, often at great peril to their own lives. But, speak up we must, no? Otherwise, what’s the point of living? I hope each of you is speaking out and speaking up, dear Verve readers.

Let me tell you about the African trip I have just come back from. I went to attend TEDGlobal in Arusha, Tanzania and witnessed so many brave women who are doing just that — speaking up for what they believed in. Many of these warrior women happen to be TED Fellows, the programme I am a part of.

Kasiva Mutua from Kenya is one of the few female drummers on a continent where drumming is considered too “physical, sensual, and male” and therefore taboo for women. Adong Judith from Uganda creates extremely hard-hitting and provocative plays on taboo subjects in that country, including LGBT rights. One of her plays, Silent Voices, was based on interviews with victims of war crimes of the northern Uganda war. She brought together on stage victims, political, religious and cultural leaders, and members of the Amnesty Commission, in an attempt to create bridges between them by the simple and powerful act of listening. I am getting chills just thinking of how the experience must have been for the audience.

It is so special to bond with Nighat Dad, a TED Fellow from our neighbouring Pakistan. Nighat is doing path-breaking work to alleviate online harassment of women in Pakistan, a task for which she is constantly harassed and threatened herself. But she continues to soldier on bravely. She shares that the internet and mobile phones are now used to reinforce patriarchy and misogyny instead of being sources of freedom for women, and I think how similar the situation is in our own country too. Among Nighat’s accomplishments are the Digital Rights Foundation in Pakistan and also the establishment of Pakistan’s first cyber harassment helpline in 2016. We celebrate the Indian Supreme Court’s verdict on the Right to Privacy together, while hoping that something similar could take place in Pakistan too…soon.

I also encounter many brave men speaking up at TED about important issues like gender equality. I am moved to tears after listening to the multiple award-winning Uruguayan photographer and film-maker Christian Rodriguez. When Christian isn’t on assignment for National Geographic, he is busy on his long-term project of documenting the lives of teenage mothers across Latin America. This is a very personal project for him, as he is the son of a teenage mother himself. He wants to shed light on the circumstances that lead to teenage pregnancy and motherhood and also focus on boys as a part of the solution. “We must stop teaching them to be macho men!”

From Uruguay, let me take you across the globe to the Philippines. On a bus ride back from an exclusive TED Fellows safari to Tarangire National Park (where we see everything from elephants and giraffes to zebras and cheetahs), my new friend Edsel Salvana tells me about how the world is on the brink of a new HIV epidemic. Most people think that HIV is one virus, but actually, new subtypes of HIV are being discovered regularly, such as the Asian subtype AE which is rampant in Edsel’s home country of the Philippines. These variants can easily make their way to other countries and create great havoc. Unfortunately, as he notes, most of the world’s research and focus is on the HIV subtype B that is found mostly in the Western world, even though this only accounts for 12 per cent of worldwide cases of HIV. These are sobering statistics and I am praying that the world wakes up and listens to people like Edsel and follows the groundbreaking work he is doing at his institute in Manila.

Actually, I am praying a lot these days. There’s so much rubbish happening all around. But each time I encounter something terrible, I remind myself that there is also beauty in the world and there are also people like my friend and senior TED Fellow, Dr Anthony Vipin Das from LV Prasad Eye Institute, Hyderabad. Over a picnic lunch at our Ngurdoto Mountain Lodge in Tanzania, he shows me his new invention — the sub-dollar paper phoropter. This is one of the many inventions he is involved in — like the Braille phone and Lechal, the haptic shoe for the blind, that are revolutionising eye care for thousands and, soon, millions of people worldwide. Vipin is one of my all-time favourite desi heroes!

Three years ago, dear readers, in my Verve column called The Bright Continent, the title of which was borrowed from the name of the book my Yale World Fellows’ classmate Dayo Olopade has written, I told you about how there were so many commercial opportunities and technological innovations in African countries that were improving outcomes for families, children and the environment. Dayo had argued in her book that in many ways, Africa’s model of doing more with less — of working around dysfunctional institutions to establish strong informal networks — could be a powerful model for the rest of the world. During my TED experience in Tanzania, I witness live what Dayo had written about in print. There are so many exciting African ideas presented about the future of the world which were created from within the continent itself. Truly, the next century is going to be the African century!

I am thrilled to hang out with Joel Jackson, also a TED Fellow, who has in the span of just a few years, created Mobius Motors — a company that designs, manufactures and sells SUVs built specifically for the African market. Then the Somalian Abdigani Diriye tells us on the TED stage about the huge renaissance in African entrepreneurship and technology. He shares how more than 100 incubators, accelerators and hubs have already been created recently in countries like Kenya, Nigeria, South Africa and Rwanda. Diriye is the founder of one such business accelerator in Somalia where he has mentored 25 start-ups so far.

Meanwhile, a New York-based Senegalese celebrity chef, Pierre Thiam is cooking up ways to take Africa’s indigenous food grains like fonio to global markets through distribution deals with grocery chains like Whole Foods Market. And publisher Bibi Bakare-Yusuf is creating an exciting African archive of ideas by publishing new content by young writers from the continent.

I feel a palpable sense of African pride during my time in Tanzania. Africa has knowledge systems more sophisticated than so many others, and its citizens are now tapping into these instead of staying constrained within the limits of a colonial-imposed mindset or knowledge ecology. These include using traditional weather, agricultural, architectural and medicinal systems, and even social systems such as the practice of Gacaca, a traditional justice method that combines reconciliation, communal healing and rehabilitation, which was used successfully after the Rwandan genocide to enable the country to move ahead.

Photograph by Christian Rodriguez for Ikire Jones in Tanzania

I feel this sense of African pride manifest itself in so many beautiful and colourful ways across the conference. It is in the fabulous clothes that TED Fellow Walé Oyéjidé makes for his American menswear line Ikiré Jones, fusing traditional African prints with his own funky design sensibility. It is in the cool electronic sounds of the stylish and incomparable DJ Blinky Bill, or in the silken Ethio-jazz of Meklit Hadero that I could listen to for the rest of my life and never tire of. It is also in the feminist worlds that Afro-futurist sci-fi writer Nnedi Okorafor creates in her novels, especially her books about Binti, a young African woman who leaves her village to travel to a famous interstellar university called Oomza Uni.

I am leaving you with an image, dear readers — the image that serves as the lead image of this column. It is the result of a spontaneous collaboration between Walé and Christian both of who I have written about above. One day, in the middle of our conference, they decided to do an impromptu fashion shoot for Walé’s label Ikiré Jones, with three Masai men as models, and on this shoot, they took with them another TED Fellow, the American cellist Joshua Roman, who accompanied the Masai student Papakinye Lemolo Ngaiyani on a spoken word performance during the filming. The image captures so much of what I can’t say in words, but I will say this: isn’t it so beautiful and magical when different worlds come together, with love and mutual respect?