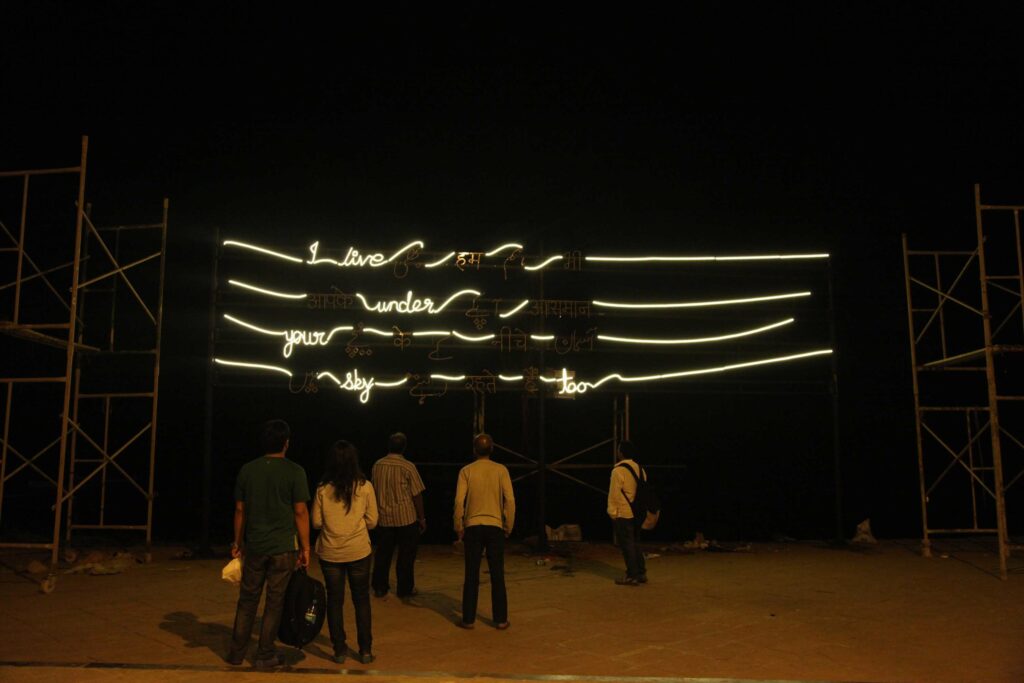 The (re)public of art: Musings from India Art Fair 2013, Unbox and the Gotye performance in Delhi

As I popped into Delhi some weeks ago, I felt a sense of familiarity walking through the NSIC’s grounds in Okhla, the venue of the fifth India Art Fair. Inside, the fair had settled down quite well, both location wise and identity wise. The art was more commercial, and the gallerists seemed happier. Jitish Kallat’s Covering Letter was one of the works that stood out for me. It was a light projection on a wall of water vapour of a letter that Gandhi wrote to Hitler, advising him against war. At the booth of Kolkata’s Experimenter, I enjoyed experiencing the Dhaka-New York-based Naeem Mohaiemen’s sandstone sculptures made by casting old photos of a lost family home in Bangladesh. The Montreal-based Hajra Waheed’s unexposed Polaroid drawings were as evocative. Hajra told me (as we reminisced about the Schwartz Hebrew deli sandwiches that I crave each time Montreal is mentioned) that they were drawings of the Aramco oil company’s compound in Damman where she spent many years as a child. The world inside Aramco (with streets called Pine and Spruce) was so very different from the Saudi Arabia of outside.

Like last year, I had more fun in the speaker sessions and ancillary events of the fair. There were so many – and one had to make choices. Missing the Mona Hatoum talk is a particularly bad one that I ended up making, but watching the always erudite Parul Dev Mukherjee, dean of the school of arts and aesthetics at the Jawaharlal Nehru University, shepherd her speakers forum guests (like Yale art school dean Robert Storr) into and out of arguments, compensated, I suppose.

Among the ancillary art events, it was good to spend a morning walking about the retrospective of Nasreen Mohamedi that was on at the Kiran Nadar Museum of Art in the DLF South Court Mall in Saket. I liked how they had arranged Mohamedi’s diaries for us to see – her words and drawings scribbled in their pages were as beautiful as the larger works on the walls. I also liked how they had replicated Mohamedi’s studio environment with the music of Bhimsen Joshi playing. Subodh Gupta’s Line of Control sculpture outside the Kiran Nadar museum is impressive. It is a pity that most people who visit this mall stop at the sculpture and do not step into the museum. Placing a museum in a mall is a bold move – one among many that are spreading art outwards in our country. More on that later in this column, but I do hope that the KNMA manages to attract the crowd it deserves, soon. It is such a gem.

At Girish Shahane’s Skoda Prize Show at the National Gallery of Modern Art, the four finalists got a large hall all to themselves, which was perfect for winner Tallur’s magnificent works and Srinivas Prasad’s ‘climb through’ igloos. What caught my eye here was the simplicity of the CAMP installation. Shaina Anand (who along with Ashok Sukumaran, Sanjay Bhangar and Zinnia Ambapardiwala together form the CAMP collective) gave me a guided tour of their Radia tapes screenplay installation. Their artistic practice involved taking copious transcripts of the infamous Radia tape telephone conversations and converting these into a screenplay accompanied by an interactive voice-response system audio installation. It was mesmerising to experience. (Dial 011-66662626 to listen to their scene-by-scene transcript; I do hope the number still works by the time you folks are reading this column.)

It is the age of the collective. The Raqs Media Collective was pretty much everywhere this art season in Delhi. Their ‘No’ installation at Feroze Gujral’s Outset House took art to a (w)hole new level (I’m just too punny, I know!) while their cheeky ‘Sold Out’ installation greeted visitors at the Art Fair entrance. Their Sarai Reader exhibition, titled Art as a Place served as the closing event of the fair and it played with every convention possible – physical and conceptual about what is art, how it might be made, and how it might be viewed.

The entire Sarai Reader exhibition has unfolded through three episodes over the past few months at Devi as a series of propositions, made by perhaps a 100 ‘artists’ and ‘non artists’ in formats ranging from scripts, assemblages, images and live performances. (The name refers to the popular annual book series that the Raqs founders have edited for years, through the Centre for the Study of Developing Societies, which they also run.) That night, as I strode through the ‘cybermohalla hub’ on the Devi grounds, navigated the walls of string that were being spun around me by eager volunteers, sifted through the ‘bureau of contemporary jobs’, watched a Kathakali fire-eater, played with toy butterflies and participated in the script reading of a live performance, the questions ceased to matter. All that mattered was the experience.

It was equally joyous to be inside the expanded Khoj space in Delhi. All the years of struggle have finally paid off for the committed Pooj Sood and her team. I loved the new energy that Ambrish Arora’s cost-effective architecture had made possible. Between the art fair on one side and the biennale on the other, any vibrant art ecosystem needs many more creative hubs like Khoj, that serve as meeting points for artists to interact, to ask questions to each other and to engage with their audiences. I’m so glad to see many other new spaces emerging (like CONA in Mumbai), following what institutions like Khoj have been doing at the vanguard.

I was visiting Khoj to attend the opening of Auditions, their exhibition that culminated their sound residency that, this time, looked at how low-tech devices and recycled technology might be used to craft sonic landscapes. Some of their sound artists in residence had approached sound through technological interfaces, some through field recording, some through touch and some through storytelling. I rather liked how Rudi Punzo’s sculptures used an old Atlas bicycle and physical motion to create rhythmic sounds. I also enjoyed playing with Pawel Janicki’s New Delhi Audiograph that used Hindi letters as the structural foundation of a musical composition. The work made use of a Kinnect gaming console to enable the audience to interact with it. By moving differently one could control different parameters of the music and image generated by the installation. It was fun!

It was also fun to take part in a live performance by Chi-Wei Lin called Tape for Delhi. This was a concert without instruments, where we sat in a circle and passed around a 100-metre-long ribbon that had hundreds of phonetic characters embroidered on it. As we read the tape and made the sounds, a spontaneous chant arose. Was it art? Hell, yeah! Art combined with meditation. (Free, and cheaper than my therapist, what’s not to like?) Bring it on!

It feels very good to be a part of this experience; of taking art out of white viewing cubes and back into the realm of interaction and daily life, which is where a lot of our folk and traditional art come from in any case. Those leading this re-imagination in urban India include people like Elise Foster Vander Elst, who through her Asia Arts Projects and their (En)counters series, have creatively intervened in public spaces. Elise’s recent intervention Power-play was held at crowded Mumbai venues ranging from Juhu Beach to Bandra. Among the interventions was Resist, a participatory performance by the PVI Collective that encouraged audiences to fight for their cause using a tug-of-war game. Another artist Kay Abude worked with local artists on her Production Line using locally sourced textiles to create interpretations of Indian currency in a special workstation, while Reena Kallat created a public sculpture with 20 sports podiums with jumbled numbers and levels.

I’m also very excited by the work that curator Diana Campbell has been doing all over the country, not just with the sculpture park she is putting together in Hyderabad, but also with her efforts at curating unexpected public art in cities like Chennai and Mumbai. In Chennai, Diana has curated some extraordinary art in the 1.1 million-square-foot Phonenix Market City mall in collaboration with the mall’s co-developers, the art-loving couple of Sunita and Vijay Choraria. As a sign of their deep commitment, the Chorarias have installed a giant nine by six metre hi-resolution LED display that will continuously beam video art outside the mall, the mall’s escalators inside have ‘tickers’ installed alongside them to provide a platform for text-based art, and the elevators too play sound art for their patrons. All over the mall, giant installations by artists like Thukral and Tagra and Gigi Scaria, enable the thousands of visitors that pass through each day, to encounter art, and to be touched by its magic, in pretty much the same way that visitors to Bandra’s Carter Road promenade are touched, when they see Shilpa Gupta’s gigantic light sculpture, that states in Hindi, Urdu and English, simply and poignantly that ‘I live under your sky too.’

This year’s Unbox festival (at a new sprawling venue, the Zorba farmhouse) hosted multiple stages, several work rooms and bespoke lab spaces. You could chose from a wide array of options. Produce a zine, go on a sound recording workshop, hang out with gurus like MP Ranjan or John Thackera, listen to performances that mashed up the harp with electronica, Bob Dylan with bhajans, work with bamboo or computer chips, talk about microfinance, print your own T-shirt, learn about the cycling economy, brainstorm about architectural solutions for humanity, make your own city map, mix your own cocktail, learn about newspapers that talk to you or educational videos for Indian Parliamentarians, redesign an agricultural video game…the list was endless.

And then there was the spontaneity. One afternoon Rei from Japan brought a whole bunch of mochi dessert to give away to us all. She then played a cute mochi dance tune from her iPhone, and organically a bunch of us surrounded her and started dancing with our hands in the air as if it was the most natural thing in the world.

When I squeezed into Delhi’s Blue Frog to listen to Australian music sensation Gotye, I had no idea that his next stop was LA where he would pick up all the three Grammies he had been nominated for including Record of the Year. (Yes, OMG sums it up just right!) Gotye was visiting to perform the closing leg of the Australian culture festival Ozfest, and Delhi-wallahs gave him and his five-member band a very warm welcome. Gotye’s music is quirky electro-pop – nothing like anything else out there, and rather addictive once you start listening. What charged up the audience in Delhi, besides his singing, was Gotye’s drumming skills. He leaped all over the stage playing the drums and other instruments, cracking jokes, shifting the tempo effortlessly between fast numbers and whispered ballads. By the time he sang his chartbuster ‘Somebody That I Used To Know’, the audience was pretty much eating out of his hand, singing aloud and enjoying the crazy mix of instruments including a harmonica, autorickshaw blowhorns and even a rubber duck, that he had brought along. I adored the visuals that were playing behind Gotye on the screen; they were superb, surreal animation clips. What musicians like Gotye are doing is bringing in an element of craft and the hand-made, fusing electronic with the folk and creating experiences that you really want to be at and not just listen to on YouTube. It is the future of music in a downloadable world.