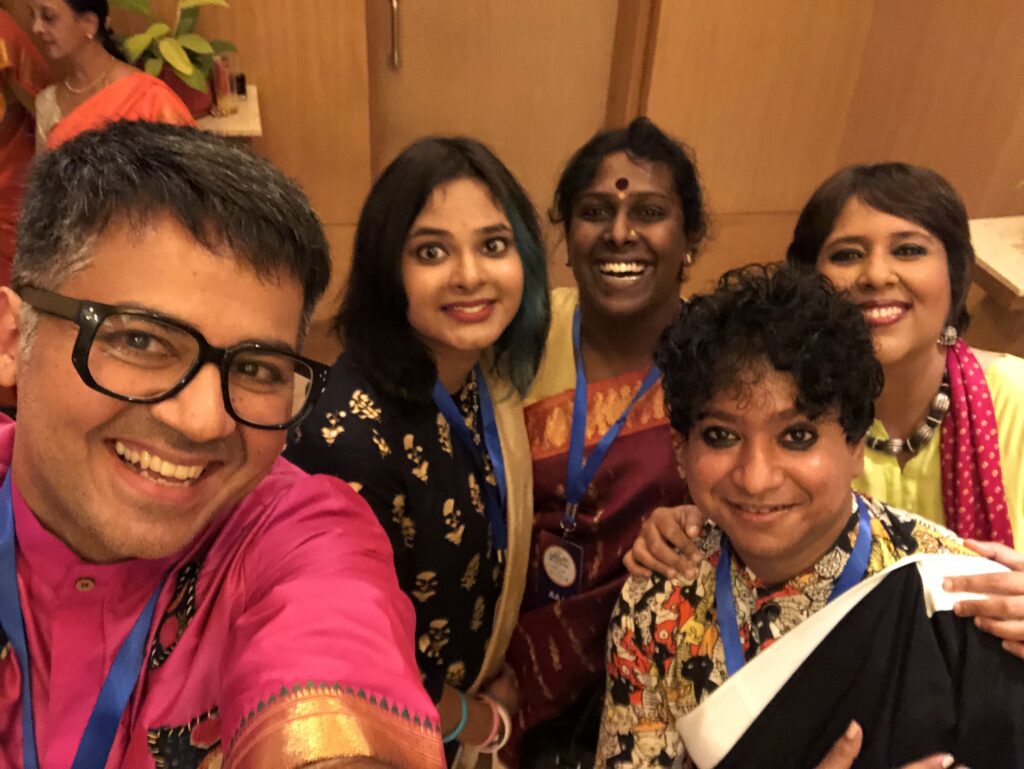 Just a few months ago, who would have imagined that we would be entering June 2020, which is considered to be Pride Month globally, in this way? Now, as I write this in the middle of the COVID 19 pandemic in Mumbai, each day brings a new set of troubling news – either about the disease, or the callous treatment of our country’s most vulnerable, or the severe lack of infrastructure to manage this crisis. What gives me hope in these difficult times are the great resources being built from within the queer community. Pink List has a list or queer causes you can give to at this point and has also launched a huge new initiative to engage politicians with queer issues; my friend Rafiul of the Queer Muslim project has been tirelessly raising funds for the people of West Garo Hills in Meghalaya, trans activist Grace Banu is doing the same in Tamil Nadu, places like Keshav Suri foundation are also doing their best pan-India …and this list goes on, thankfully. So in the middle of this deep crisis, while we are seeing the worst of people’s behaviours, whether in blaming minority communities, or not allowing doctors back to their own homes out of fear, or in the really inhumane treatment of migrant workers, it is also a solace to see that there are so many queer angels who are making a difference in a positive way.

In a sense this response is also symbolic of what the queer movement after 377 has been about. Great efforts from within the community, in the face of hostility or ignorance not just from outside but also, often, from different parts of the queer movement itself.

I am writing this post to mark my book Gay Bombay’s new edition which came out some weeks ago.  The world has changed so much between when it first came out in 2008 and now – so you might wonder, what is the point of reading this old book 12 years after it was published? I think it is important because our queer lives and stories continue to matter! When the book first came out, it was anthropology but now I think it can be read as a slice of queer history. This book takes you back to the early days, and tells you how it all began through the 1990s and 2000s based on my research within the Gay Bombay group as well as my own diary entries – there is lots of naughty stuff in the book, which perhaps might not be considered naughty by today’s standards, but it is what it is!

In the new edition I ask the question – what kind of world are we going to create together now that section 377 is gone but we have a regressive trans act? How do we find the connectedness between trans rights, Dalit rights, Adivasi rights, and the rights of other minorities and move ahead together? I believe that we need the modus vivendi of this book’s conclusion now, more than ever. I talk about coalition politics from a decade ago that continue to be needed at this time.

I am especially proud of the additional chapters in this edition by Professor Ulka Anjaria of Brandeis University and Professor Kareem Khubchandani of Tufts University. The loving way through which they contextualize the book, and indeed, their generosity as well as that of so many other professors from across the world in using it as a teaching aide for their classes on gender, sexuality or digital studies, has been overwhelming. I am also very proud of the closing conversation that ends this edition, between me and Professor Dhiren Borisa of O. P. Jindal Global University, in which we reflect on both our work and the future queer histories that still need to be written – especially more intersectional queer histories.

To me, the queer movement post 377 is going to be about these intersectional histories, told through multiple voices and multiple perspectives. While 377 existed, it was something that everyone galvanized around, or was urged to galvanize around, what kind of a coalition politics will we create now? Will we gather around the issue of marriage like so many other Western countries? There are already efforts being made in this direction. Can we also we re-frame our struggle in a more inclusive way?

The September 6, 2018 progressive judgement, popularly called as the Navtej judgement, that read down 377, came on the heels of two other progressive Supreme Court judgments – one on Privacy (2017) and another on Trans rights (the NALSA judgement of 2014). However, the rights that the progressive judgments like NALSA and Navtej have given us have been severely been curtailed by the new Transgender (Protection of) Rights Act 2019, which was passed without any debate in the Lok Sabha on August 5, 2019. This regressive act now mandates that India’s transgender citizens submit themselves to a “certification process” involving a government official and doctor. Also, if transgender people are sexually attacked, their attackers face a maximum jail term of two years, against a minimum of seven years for women who are attacked.

The regressive Trans Act certainly needs to be modified. I sincerely hope that the queer movement after 377 galvanises around this important issue, the same way as it did around 377. There are so many other laws that need to change. Our laws need to recognize same sex marriage and enable same sex partners to inherit their spouse’s property and also make decisions about the medical treatment of their spouses. We need anti-discrimination legislation, legislation that bans conversion therapy and protects intersex babies and minors from non-consensual conversion surgeries.

Alongside this urgency to create further legal change in a post 377 world, we also need to create change in mindsets across the country. I am enthused that there are many progressive states like Tamil Nadu, Kerala, Karnataka and Chhattisgarh, that are supporting their LGBTQ residents either with progressive policies, or with employment opportunities and I am hopeful that these acts of inclusion will percolate outward to other states in the country, as well as upwards, to a national level. There are also so many progressive companies create inclusive work environments for their employees. We are seeing more and more diverse queer representation in popular media like films and on web series. All of these efforts will add up to societal change, and that is what the queer movement post 377 is going to be about – how do we mainstream queerness in Indian society?

The thing is, after 377 has gone, we are no longer criminals. But between being non-criminals and equal citizens, there is a long road to travel, and my hope is that our Indian queer movement post 377 walks that road in solidarity, both within, and also outside, by aligning with other social justice movements in the country, such as those around caste, gender, ability, and so many others.