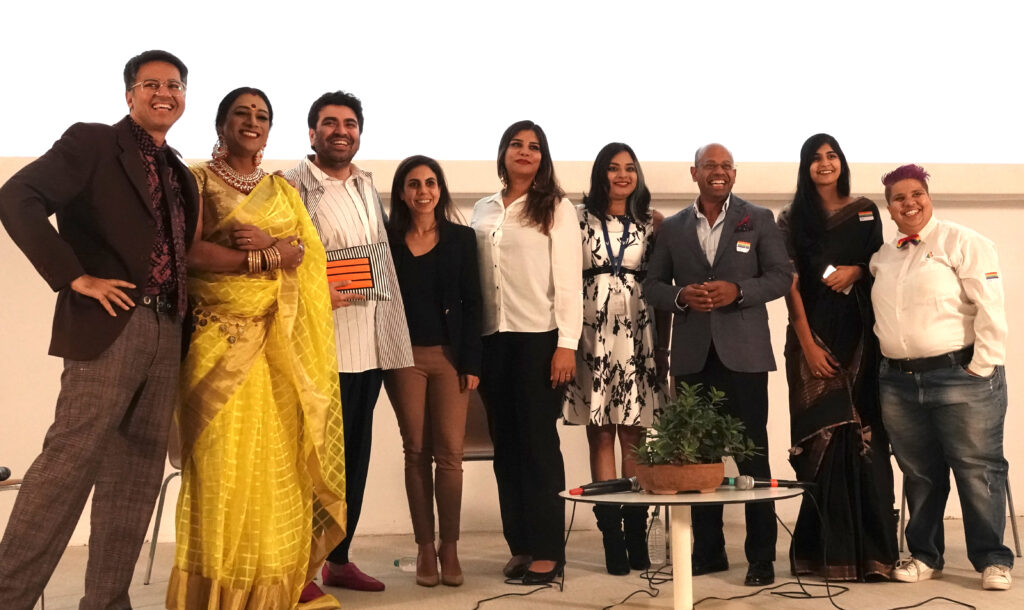 One year since the trans inclusion manifesto

(This post originally appeared on the Godrej India Culture Lab blog on 18 December, 2019)

Before the Manifesto, our Lab – for the past eight years – had been circling around various issues within the queer community. I happen to be gay and a part of the movement in so many ways, and over the years I think – becasue of that – we’ve attracted people to the Lab and Godrej at large and we’ve tried to make our campus a safe space for the queer community. So we have curated with the intent to have a lot of LGBTQ conversations – and also specficially trans conversations.

I’m thinking back to the Zainab Patel and Gauri Sawant Facebook Live, which was a one-hour conversation on trans rights which got 300,000 views, I’m thinking of the Dancing Queens and our journey with them over the years – where they did their first ever huge public performance at the Lab, Jeff Roy (our scholar-in-residence) filmed them, that become a film that our Culture Lab produced and then circulated, I’m thinking of the Aravani Art Collective and how we took them to ‘We The Women’ at Mehboob Studios and the incredible reaction we got from the audiences there.

So I think there was a feeling in the community that once Section 377 goes away – we’ll be happy – but we have realized that we have to do a lot more. For us at the Lab it was a realization that we must do more not just through our programming. Over the years of us doing these events at the Lab, and being an integral part of the community at large, we also became one of the key voices of the LGBTQ community.

In 2017, the United Nations reached out to us and asked if they could partner with us for the launch of the UN Standards of Conduct for Business, and we were proud to host the global release. This report was very important for us to see just how much other companies look to us at Godrej for guidance, and how much the community trusts us. The fact that we were hosting that launch gave them a lot of confidence.

So we realised we were uniquely positioned at the Lab in this regard – and we thought about what we could do to take the spirit of the 377 verdict forward. We decided to work from where the UN manifesto left off – what if we could do something about India in particular? I think our engagement with the trans community over the years made us realise how important they are within the LGBTQ umbrella. 92% of India’s trans people are unable to participate in any economic activity. Less than half of them have access to education, and 62% of those that do, face abuse and discrimination. Moreover, only 2% live with their families. We really felt that it would be a useful effort to focus on the trans community and help other companies who were asking Godrej what they could do. We also really wanted to create something of value for the trans community.

The research involved for the manifesto was amazing because we realised just how much there was that was being done already – whether it’s reports by Community Business, whether it’s organisations like MINGLE (which I was very happy to mentor over the years) and their important 2016 report, whether it was global reports that we started getting access to which made us realise that there was already so much research being done worldwide. We all learned so much through the process.

Our intent was also to work with our partners — I’m so grateful that folks like Zainab gave so much of their time and mentorship to the project telling us about the arguments that we could use. What excites me about the manifesto is that we wrote it alongside our friends from the community, and it became something that we could all then own and use. The love and joy that was in the room at the launch of the manifesto was so special — from all those on stage to the warmth from everyone in the audience. To see 300 people – corporate India, activists and queer citizens at large – come together and interact with each other felt historic. Particularly in terms of corporate interactions with the LGBTQ people.

A lot of work has happened since then — especially if you look at Pride Circle and the way job fairs have taken off. Ram and Srini (from Pride Circle) say that being in that room that day gave them the confidence that they can do something like that. Keshav Suri has put The Lalit on this meteoric track to being inclusive. He said, in interview after interview, that he came to Godrej and thought ‘this is amazing, why can’t I do this?’.

I’ve been talking to companies across the country (because now it’s trendy – so people like me are called to talk about LGBTQ inclusion!). Visa, Franklin Templeton, Swiss re, KPMG – you name it – they’ve called me – I’ve gone there. I think Section 377 going away has unlocked the latent inclusion tendencies that companies had and it’s enabled them to try and ‘come out’ as loving, inclusive spaces – which some companies in India always were, but they were operating out of fear. I think 377 going away has really helped them to become that space.

Of late, I’ve become more circumspect. I’ve realised that so many companies just call you because they want to tick a box and they’re happy that they get to post on social media about you having spoken there. After that, they don’t really do much. So of late, I’ve started asking them to make a payment to an NGO of my choice – based on NGOs in the city that the corporate is located in. What has been amazing is that companies have actually started paying up – Franklin Templeton made a contribution to TWEET Foundation, Swiss re made a contribution to Solidarity Foundation. And that money is already being used for projects. My principle now is, until you figure it out at a corporate level at least help our community do something. Our LGBTQ NGOs really need the money and they know how to spend it.

I think more than companies, I really enjoy speaking to students now – whether it’s at IIM Lucknow or Trichy. At companies there will always be someone who says stupid things like ‘why don’t we work on gender first?’ or ‘what if everyone comes out and says “I want to transition?”’. I think students are amazing – they don’t ask dumb questions. And if they do, it comes from curiosity or a quest to know how to make the world better.

To give you one specific example, at IIM Trichy – I asked them how many people identified as LGBTQ in the room (and I do this at every college, typically many people don’t raise their hands). And out of 150 students, 9 raised their hands. Which is amazing – nine people who felt confident enough to say that they’re queer in front of their peers. And that’s a combination of legislation, pop culture, advocacy, even just the fact that they have seen me and recognise that it’s a safe space, or the fact that their college has just funded their first LGBTQ club this year …  I think it’s all coming together. I think that companies that want to change can learn a lot from students – campuses are changing way faster than the companies that they will eventually graduate and go into. Young India is really changing, and if companies want to keep up, I think they better change their policies really, really soon.

And the people working to this end are doing incredible work – from Neelam Jain from Periferry to Humsafar Trust’s Project TRANScend. And I have to thank corporates that are willing to step up – whether it’s a Bank of America, or an IBM – which has worked very closely with Solidarity Foundation. Because of the systemic discrimination of trans people at every level, a lot of companies are recognising the need for skilling programmes for trans people as well. What Periferry did with ANZ is a great example – they did a residential training programme for about 25 trans people, at the end of which everyone got a certificate and then ANZ decided whether they wanted to recruit some of them for their organisation.

Trans people are sometimes invited for interviews and then denied entry to the building by the security guards – therefore companies need to go beyond well-meaning HR departments or a CEO that says ‘I want to be inclusive’. You have to sensitise your whole team to create a safe and welcoming space. This process of constant self-correction is very important – and I see companies going on this journey of iteration the same way government organisations like Kochi Metro has been too. I think until we reach a point in our society where trans people are not denied opportunities in education and aren’t discriminated against, companies can recognise the need to make specific interventions that will really help trans people here and now.

And unsurprisingly, the companies doing good work have hired queer people who are pushing for change from within the company. Thoughtworks has Aditya Batavia and Nayana Udupi, Zainab Patel is at KPMG, Samyukta is at Swiggy..Swiggy just joined Pride Circle, they’re starting their own Employee Resource Group, and are trying to hire more trans people. All these companies are taking steps towards sensitisation of their employees. And this is what I write about in my book ‘Queeristan’ as well – if you create a safe space for queer people – we will be your agents for change, we will bring in other people, we will bring in the talent that exists in our community. And you see that with someone like Anubhuti at Tata Steel. One person changed Tata Steel for so many others.

I also really like the fact that there are marketplaces and job fairs being set up across the country – whether it’s RISE, whether it’s Qu-rious, whether it’s Vividh, this pace of change is super exciting. When we launched this manifesto I don’t think we imagined that one year after it there would be multiple job fairs in the country. I hear of a new one every week! So the rate of change has been exhilarating.

In terms of the Trans Bill – I see some parallels between the movement against 377. In 2009, when 377 was deemed as unconstitutional, some companies decided to turn towards progressive policies. In 2013, when Section 377 was reinstated, some companies decided to not go on the inclusion journey. But many companies saw it as something that would take its own course legally and worked towards creating an ideal inclusive space for themselves and their employees. And I see that happening in corporate India with the Trans Bill as well. The version of the Bill that has been passed right now is far from ideal, but I think our movement is strong enough to push for change and mobilise – it’s important to remember that we have the 2014 NALSA judgement in our favour. Clearly the version of the Bill which has been passed goes against the spirit of the judgement. So I don’t see the existing Trans Bill as an excuse for companies that want to be inclusive – the NALSA judgement is their blueprint.

In any case, there are enough examples of organisations that will help you on this journey despite the legal scenario. From Community Business, to Interweave Consulting, to Solidarity Foundation – click here for the manifesto and the resources that you can check out for any and all expertise on the matter!