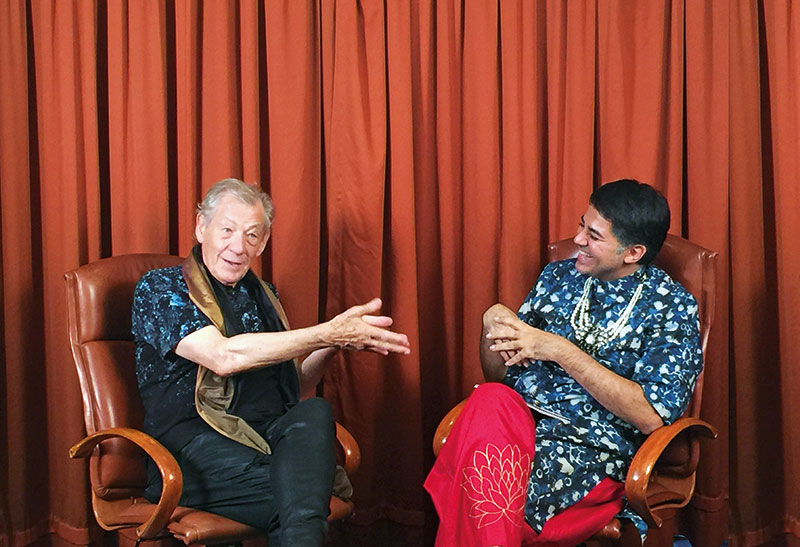 “Did he touch you? Do you have Magneto’s superpowers now?” My friend’s nine-year-old daughter (actually, she’s my friend separately too!) asked breathlessly when she realised I had hung out with Sir Ian McKellen in Mumbai. Who knows? The encounter was energising in ways that I am still only beginning to fathom.

Even though I’m 40 years old, I am as thrilled by the rush of new friendships as my nine-year-old buddy. Maybe making connections becomes more random as one grows older, and so rare, which is why they become even more precious! In this case, what began as a fun conversation, at Nita Ambani’s welcome party for Ian at Antilla, morphed into a meeting of minds over the course of four days, in the midst of all the other engagements that he was a part of on his rushed Mumbai trip.

The common ground between us both was LGBT rights. Ian is, of course, one of the world’s most lauded Shakespeare actors and a major Hollywood movie star. He was in India courtesy the British Council and the British Film Institute to mark Shakespeare’s 400th death anniversary. However, to me (and I think that he would agree), his most important role over the past few years has been that of a global LGBT rights champion. He regularly makes the top 10 on the World Pride Power List and his outspokenness has made him as much of an LGBT icon as his blockbuster roles in the Lord of the Rings or X-Men franchises.

We spoke extensively about this activist profile in a video we recorded just before he stepped out to inaugurate Kashish, India’s biggest LGBT film festival, at Liberty Cinema in Mumbai. What was originally going to be a 15-minute video landed up being almost a one-hour extended conversation! (Check it out when you can here)

During our chat, Ian was absolutely certain in his belief that gay people needed to come out of the closet. He himself came out rather late, at age 49, and told me that he regretted having waited so long. As an out-gay person myself, I could relate completely as he asserted that everything becomes better once you come out. “I was out to my friends and co-actors for many years,” he shared, “but I wasn’t out to my own blood family and to the media. Before I came out publicly in a BBC interview when I was 49, I came out to my stepmother who was 80 then, and when I did, we got much closer. She lived till 100 and we were best friends till the end. Anyone who comes out will find that they have the respect of their friends and even of strangers. Coming out was such a relief on all accounts. Everything improved, including my acting. Up until then, my acting was about disguising. After I came out, it became about revelation.”

Along with others, Ian then created a lobby group called Stonewall to convince politicians and the general public about the importance of LGBT rights. At that time, the controversial Section 28 was under consideration in the British Parliament which they managed to get removed by consistent lobbying. Through Stonewall, Ian has appealed for change in different countries across the world. We discussed the situation in India at length during the time we spent together and in his video chat with me, he humorously apologised for our own Section 377 on behalf of the UK. “We are very sorry we gave this to you. It’s a British relic, a colonial law, and there’s nothing Indian about it. It simply has to go!”

We were recording our chat on Ian’s 77th birthday and we had planned a surprise for him. We had smuggled in Anwesh Sahoo, Mr Gay India 2016, and hid him behind a sofa. At the end of the chat, Anwesh jumped out singing, ‘Happy Birthday!’ “You have your life ahead of you. Be yourself and be proud of who you are,” he told the 20-year-old teary-eyed Anwesh.

“Don’t give up; don’t be fazed,” he counselled me, when he sensed my enthusiasm flagging. “In the UK, there have been so many changes since 1990 that we never thought possible, but it has happened in our lives. People today have social media which is powerful. In our time, we had fax machines, or letter writing that we would use to petition for change. Today, in fact, the UK government advertises the country as a place where LGBT people will be treated well. It is a tourist destination! No politician in the UK can say anything anti-gay today. This has all happened in just the past few years. It will happen in India too.”

RJ Malishka with Sonam Kapoor at the Kashish 2016 inauguration

This sense of empowering change all around the world is what gives Ian’s life the greatest purpose today. It was such a joy to see how he interacted with the attendees at the Kashish opening. Brushing his minders aside, he rushed into the crowd, and happily posed for selfies. On stage, he lifted his candle, Gandalf-like, towards the Art Deco Liberty Cinema ceiling, while inaugurating the festival with Sonam Kapoor and Sridhar Rangayan.

My most endearing memory is of us both wolfing down cake and tea at The Taj while gossiping about the folks we were going to encounter at the Queen’s birthday party later on in the evening. Such purity and simple joy! “Be in the moment,” he told Aamir Khan at his very first public encounter in Mumbai at the NCPA. During his short, intense visit to Mumbai, Ian lived out that advice to the T, electrifying everyone who he met. In the modern world, if we can practise even a bit of this quality, we would qualify as a superpower, wouldn’t we?

It has been an exciting month for me personally, dear readers, with regards to LGBT issues. Kashish this year was simply spectacular. World-class cinema from around the world, brilliant opening and closing nights, so much camaraderie and a disappearance of barriers — LGBT, straight, whatever; it just didn’t matter. There were more than 1,000 human beings each day, connecting with each other through their emotions and creativity. I felt blessed to be a part of this world. It was a joy to participate, whether on a panel on Section 377, or as a co-producer of Jeff Roy’s Dancing Queens documentary or as an official festival sponsor through Godrej or, most important of all, as a citizen of an imagined free India, being present and being in the moment each day.

There were many emotional highs. Sonam Kapoor and Kunal Kapoor’s spirited speeches and all the insanely cool opening night performances including Sona Mohapatra’s other-worldly music. The closing night with the transgender dancing queens, and diva Sushant Divgikar’s magnificent cabaret tribute to Sushmita Sen. My idol — the celebrated historian and scholar Saleem Kidwai — being honoured with the Rainbow Warrior Award. And in between these two celebratory bookends — world cinema that made me laugh and cry like never before.

There were so many good films, but to me, the standout this year was the National-Award-winning Daaravtha by Nishant Roy Bombarde. It is a simple story about a young boy Pankaj who is different from his peers because of his love for dance, henna and jewellery, and how he struggles fiercely against societal expectations. It is also a story about parenting. What does it mean to be a parent and love your child when he or she is different from what you might have expected? Nishant Bhavsar’s acting as the young boy and Nandita Patkar’s performance as his mother are just extraordinary. Made on a budget of just 5 lakh (Roy Bombarde’s own savings), but with production values that far exceed this modest amount, this is a must-see film. I don’t know when you might get a chance to do so, dear readers, but if you do get a chance, don’t miss it.

I also hosted two important LGBT-themed events over the past month. The first was a special meeting in collaboration with the UN with some of the finest activists, thinkers and strategists on LGBT rights in India. We had invited heads of some of India’s largest companies to come together and brainstorm how corporate India can help shift the needle in terms of diversity and inclusion. It was amazing to have actor and tireless human rights champion Celina Jaitley pitching ideas with us all day for this.

The second event was the fourth edition of the Mingle LGBT Youth Leadership Summit, again on our Godrej campus in Mumbai. Each year, as I listen to an exciting new batch of future LGBT leaders from all across India, I get charged up for the future.

I am reminded that our country’s LGBT citizens are certainly not a ‘minuscule minority’. We have a voice, it is strong, and we refuse to be silent any longer in our quest to reclaim the equality promised to us by our country’s constitution.

At the summit this year, I felt that I was already in tomorrow’s India, witnessing the ‘groundswell of positivity’ that Ian had reassured me would come one day. “Don’t be pessimistic,” he told me while he was here. “Day by day you might think — how ridiculous, we’ve been handed this ridiculous situation with colonial laws. Yet, that time will come when things will change. Remember, on LGBT issues, we are right. We have the moral high ground. There will come a time in our world when we all are treated equally. Keep on working for the change you want to see.”

Even as I type this column out, news trickles in about the terrible Orlando killings in a gay nightclub. It is very hard to be positive while faced with such violence but that is exactly what is needed. So I plan to dress up this weekend in my party best, and go out and dance, even as I wipe away my tears of despair.