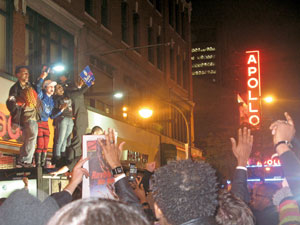 Past Forward – Reflections on Obama’s election victory in 2008

Dream, love and hope. Live life fearlessly and with passion. There is no other way. This is what I learn from 2008. A forward in my inbox triggers memories.

In 2004, I took my then boyfriend to New York for our first holiday together. It was his first visit to the city, and I had planned an itinerary that included a violin concert at the Lincoln Center, the view from the Empire State Building, walks through Times Square and Central Park, a ferry ride past the Statue of Liberty and dinner in the West Village. But when our bus finally rolled into the Port Authority bus terminal, he turned to me and asked, “Can we go to Harlem first? I really want to see the Apollo Theatre.” Being Japanese, and musically inclined, his imagination of New York and what it stood for was quite different from my Bollywood/Hollywood-tinted perspective. So that’s what we did, and luckily, I was exposed to a very different slice of the city’s diverse multicultural pie.

Some months later, we visited Atlanta together, and had the opportunity to comprehend Martin Luther King’s historic civil rights struggle and achievements within the context of his birthplace. We paid homage to the Gandhiji statue and sat in the pews of the Ebenezer Baptist Church during the Sunday morning service; the same church at which King and his father served as pastors during their lifetime. As the preacher spoke and the choir children sang, I looked around at the largely black audience and wondered if a black man or woman might ever become president of this country that I was increasingly growing to love and admire. This was not a new thought. Several of my friends in both India and the US had in different prior conversations, cited the fact that the US had so far not been able to elect a black person or a woman to its highest office as an indication of its inherent societal prejudice. The thought crossed my mind once again, when on a visit to a friend at the University of Chicago, I passed by some ghettos and noticed poverty of the kind that I thought only existed in India. At that time, Obama for President was just a whisper in the media, and The Audacity of Hope was a successful convention speech, not a best-seller book. As his amazing campaign gathered momentum over the months that followed, a knot began to form somewhere at the bottom of my stomach, and like millions of people all over the world, the ‘can he?’ transformed into a ‘can we?’

The email forward that I receive contains a picture taken by the Reverend Chloe Breyer, on the night that Obama has been declared the next President of the United States. In the picture (see above), young Americans are spontaneously singing the American national anthem on the corner of Frederick Douglas Boulevard and 125th Street, under the Apollo Theatre at about 1 am. Reverend Chloe Breyer is the director of the NYC Interfaith Center, and the daughter of US Supreme Court Justice Breyer. I reach out to her to ask if I may reproduce the picture in my Verve column, and her reply is as moving as the moment she has captured. “Since 2003, I have served as an associate minister at a church in West Harlem and as you might imagine, it was incredible to hear this new enthusiasm and sense of ‘ownership’ of the national anthem that for so long, African-American men and women have had difficulty singing with integrity in this part of the country.”

Ownership. Enthusiasm. Key words. The Obama campaign ran on the promise of change, but the undercurrents were that of enthusiasm, and ownership, hope and belonging. Much has been said of Obama’s victory speech on November 4, but I want to revisit what could arguably be considered the start of his amazing presidential race, when at the Democratic National Convention in 2004, he asked: “Do we participate in a politics of cynicism or a politics of hope…the hope of slaves sitting around a fire singing freedom songs; the hope of immigrants setting out for distant shores; the hope of a young naval lieutenant bravely patrolling the Mekong Delta; the hope of a millworker’s son who dares to defy the odds; the hope of a skinny kid with a funny name who believes that America has a place for him, too. Hope in the face of difficulty. Hope in the face of uncertainty. The audacity of hope!”

The young black people singing the national anthem outside the Apollo Theatre in Harlem, were ecstatic that after centuries, in that one historical moment, the audacity of their hopes had become a reality. The picture also encompasses their friends from other races, who are singing as enthusiastically. This enthusiasm led to ownership, to a renewal of ideals. “Yes, we can,” he said, for the past two years, and we repeated it after him, again and again until it became a mantra that shook beliefs and changed mindsets, including our own. Obama’s “we”, an all encompassing collective “we” consisted of white people, black people, gay people, straight people, youngsters and veterans, people who voted in America, and people who drew inspiration from him all over the world as a symbol for their own audacious hopes. Within that brief moment, in that giant surge of electrifying goodwill that crackled through the millions of TV sets in the world and on the streets of America on the night of November 4, as the unfettered voices of the youth in Reverend Chloe’s picture soared into the sky, my broken heart expanded, and made way for a feeling that was larger, magical and inexplicably more beautiful than anything I had felt before.