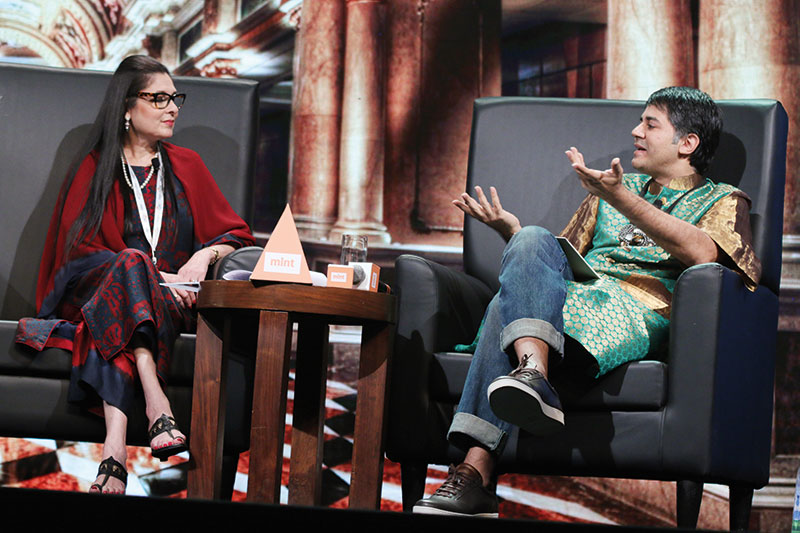 PARMESH’S VIEWFINDER: WHAT IS LUXURY?

It was a proud moment for me to share the stage with our Verve founder Anuradha Mahindra at the Mint Luxury Conference in Mumbai last month. So many years of working together condensed into half an hour of sparkling resonance. Both of us discussed with our moderator, the indefatigable Shefalee Vasudev, our joint understanding of luxury as something that went way beyond labels. To me, luxury is when you invest time in gathering deep knowledge about something. Anuradha’s mother, quilt historian Geeta Khandelwal, who was sitting in the audience wearing an exquisite shawl with detailed mukesh work on it, smiled as we acknowledged her dedication to her craft, as did the czar of Indian heritage, Padma Bhushan Rajeev Sethi, seated beside her.

I commented that luxury is about respect, of understanding the magnificent history and geography of our country, which is what enables us to have a living and vibrant arts and crafts ecosystem even today. Finally, I proposed that luxury was ultimately about relationships. Shefalee has already written about my connection with my tailor Chotu Bhai in her book Powder Room. This engagement with different stakeholders — whether weavers, textile dealers, or with artisans like tailors, who make the things we produce with their own hands — is again something we are very lucky to have in our country. I have similar relationships with my furniture makers and, actually, with a large proportion of the makers of what I choose to consume, and I strongly feel that it is our responsibility to nurture this precious handmade, relationship-based ecosystem, especially with the onslaught of mass-produced branded aspirational ‘luxury’ that is upon us.

A big thank you to Shefalee and her Mint team. They’d assembled a range of players — big names like Donna Karan, Calvin Klein and Courtney Love as well as newer stars like Imran Amed and Monica Dogra, and I feel that given the limited scope of a one-day conference, together, we did manage to take the conversation about luxury and India into very interesting terrains.

I am seeing more and more sensitivity towards our past, and towards the craft-based ecosystems that we have in our country, even though we have to sift through a lot of chaff to reach the grain. So at the recent Lakmé Fashion Week, there was an undercurrent of creative renaissance in the midst of some rather insipid shows on the main stage. The person responsible for the edginess was Gautam Vazirani — for long the silent voice behind the scenes — this was his season to shine.

I must congratulate Saket Dhankar, who ended his tenure as head of fashion for LFW, for constantly nurturing Gautam over the past few seasons, so that he could come into his own this time.

Gautam curated the secondary stage with aplomb, churning out one successful experiment after experiment. The productions he handled were not just shows. They were performance art experiences. A tortured Arjun Saluja fought for the haq of marginalised flâneurs who labour against the shackles of societal norms and expectations. Little Shilpa’s open-air performance (in a cage, and on the parapet of the hotel) was a ‘madness of muchness’, paying ode to, among others, Alice in Wonderland with a rather trippy tea party. On textile day, Gautam moved away from the government-sponsored ennui of previous seasons. Instead, he brought together some really cool labels like NorBlack NorWhite in his #IndiaCollective show, veering the sustainable textile-based fashion showcase towards lightness, playfulness and fun. (Having non-models like blogger Scherezade Shroff and hairstylist Sapna Bhavnani on the ramp upped the coolness one notch more.)

My favourite Gautam Vazirani spectacle though was Prashant Varma’s cabaret show, Old Songs with Old Friends. The setting was a vintage dimly lit bar, we sipped on wine as Varma regaled us with an old-style spectacle accompanied by pianist Aching Shaiza, singing songs from Stephen Sondheim and George Gershwin. Prashant was bitchy and he was poignant. He sang of love and loss, of jealousy and of mistakes, of friendship and of memories. There were several wincing in the room as he sang out Sondheim’s lyrics of The Ladies Who Lunch, by slowly walking from table to table, looking into each person’s eyes:

Here’s to the ladies who lunch.
Everybody laugh.
Lounging in their caftans and planning a brunch.
On their own behalf.
Off to the gym, then to a fitting.
Claiming they’re fat and looking grim

Ten minutes later, we were all wiping tears from our eyes, as Prashant sang, again from Sondheim:

Gulserene Dastur with Nadir Godrej at her film screening in Mumbai

Yes. Who hasn’t chased a mirage in their life? Or loved and lost at least once? Prashant has shape-shifted his creative output from fashion to direction, modelling, acting and singing. For someone like him, these shifts are planned, beads on a long string of creative exploration. For others like Gulserene Dastur, life just takes you into a completely new direction.

This documentary film-maker has just made her debut at age 64, and what a debut it is! Her 69-minute documentary on Mumbai’s KEM Hospital and its sister institution G. S. Medical College — Getting Better — is one of the best I have seen recently. It was my privilege to host its screening at our Godrej India Culture Lab.

Gulserene was born in Geneva and spent most of her career in aviation. Her father’s death in 2008 spurred her to become a film-maker. He suffered a fall while on a vacation in Mumbai and spent two months at the Jaslok Hospital ICU. Everything Gulserene witnessed there — whether it was the people who has sold everything they owned to meet the medical expenses of their family members, or the hardworking staff behind the scenes — made her feel that she had to contribute in some way. She first went to KEM Hospital with the intent of making a donation. However, what she witnessed there spurred her to make her documentary, which she completed over the course of four years while travelling between Geneva and Mumbai.

The documentary follows different characters — doctors, struggling patients, medical students, and ward boys — all of who are under great pressure, trying to cope with the constraints of a severely overstretched system. Gulserene’s gaze wanders through the corridors and operating theatres of the hospital, into the campus of G. S. Medical College, broken-down basketball court and all, and also into the homes of some of its patients, trying to give us a 360-degree view of the ecosystem of the hospital’s inhabitants. Some of the characters include the hospital’s then dean, Dr Sanjay Oak, who is trying to innovate, by introducing chapatti makers into the hospital so that they can stop serving less healthy bread, and Suyesh, a boy with a hole in his heart, whose father has been running from pillar to post to raise funds for the operation he needs.

KEM sees over 1.7 million patients each year — every day, there are 230 inpatients, 5,800 outpatients and 150 surgeries and there are several issues it has to deal with — overcrowding, negligence, and bureaucratic interference, to list just three. But the staff soldiers on, never turning anyone away. The film is an eye-opener. Do see it if you get a chance.