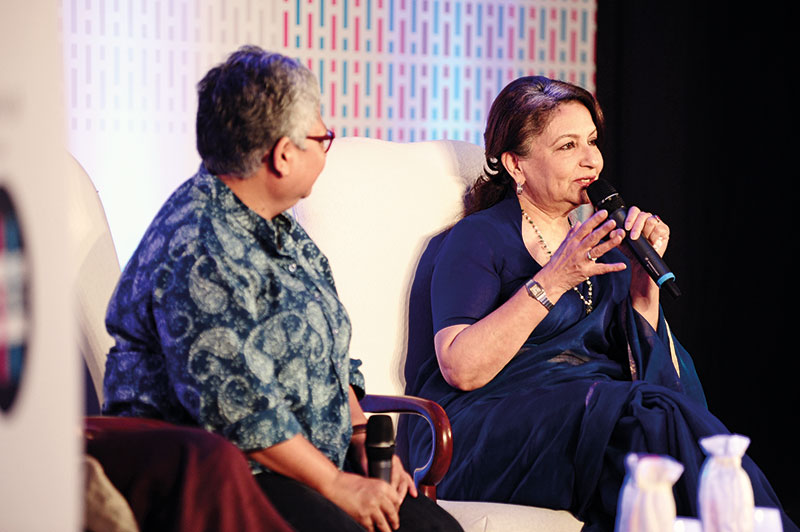 Gender-based prejudice is in the spotlight.

Last month was all about conference-hopping.  From the INK Conference in Goa, to the CII Young Indians in Mumbai, to the World Economic Forum’s India Economic Summit in New Delhi, and then to two gender conferences split across the same cities — Caravan’s The Bridge in Delhi and SheThePeople’s Feminist Conference back in Mumbai. Between all this back and forth, one thing was very clear. Gender issues are firmly on the table and patriarchy worldwide is rather nervous about being toppled. (Hence, there’s a fierce pushback.)

By the time you read this, we will know the results of the US election. Whoever wins, the sexist and repugnant commentary by Donald Trump throughout the campaign, and Hillary Clinton’s immense resilience in response, will remain in our memories forever. I found the unconscious (I can’t imagine that it could be intentional, especially on channels like CNN, which are supposed to lean more Democrat than Republican) bias of the media even more distasteful than Trump’s vitriol. In each encounter, Hillary was deemed smart, articulate, patient, tolerant and much more, but it would never be enough for the pundits; all Trump had to do on the other hand, was not shoot anyone, for the media to declare that it was a tie and or even worse — that he might win.

You recognise this, dear Verve readers, don’t you? The bar is always higher for women in a world of pushy men. This US election brought into focus the blatant sexism that takes place in all aspects of daily life, and empowered gender-related conversations globally. If Hillary Clinton has to encounter this kind of sexism, then what about other women? And each time she counters it, it makes men like Trump so nervous and insecure that they have to lash out even more ridiculously than before.

This is something Smriti Irani also confided in me as we shared a panel at the World Economic Forum in Delhi. I have not always agreed with her political positions or some of the things that she did as Education Minister (I love what she’s done so far as Textile Minister, incidentally!) but I have observed how the standard seems to be much higher for her than for her male counterparts — whether in the entertainment business or in politics.

Professor Shohini Ghosh and Sharmila Tagore at The Bridge

This inherent hypocrisy is something that was brought up time and again at The Bridge Summit in Delhi. The legend Sharmila Tagore spoke about how she encountered prejudice pretty early in her life. She was 13 and a school student when Satyajit Ray cast her in Apur Sansar but following the film, she had to leave school because a young working female actor was considered to be a bad influence on other children. Subsequently, she revealed, so many men on her film sets, including her directors, treated her badly just because she chose to live a free life and not conform to their idea of what a good heroine should do. (The long list of taboos included laughing loudly in public, dancing at parties, and travelling to meet her boyfriend.) But their treatment became much more respectful once she married Tiger Pataudi, since marriage meant that she was included into their idea of heteronormativity. I can’t wait for Sharmilaji to write her memoirs; this brief encounter had me, and so many of us in the audience, literally begging for more.

I also loved Mona Eltahawy’s fierce ‘f#$% the patriarchy’ attitude. She reminded me so much of Jill Sobule, the singer-songwriter of I Kissed A Girl, who I hung out with in Goa at the INK Conference this year. Both Jill and Mona are unapologetic free spirits and their no-holds-barred attitude rejuvenated me. Mona has written one of the most important feminist texts in contemporary times. Her book Headscarves and Hymens talks about the ‘trifecta of oppression’ working against Arab women — the state, the street and the home — and how women in the region are creating mini revolutions in each of these three battlegrounds.

Mona joked at The Bridge about how it would be such a good idea for each country to have a monthly curfew for men, just like in an experiment carried out in Bogotá, Colombia. According to this plan, for one day a month, men must stay at home after 7 p.m. She told us that reports of rape and violence were lower in Bogotá during the duration of the experiment, and we all agreed that this would happen in whichever city it was implemented in. It was imperative, she exhorted, that in each country, the authorities teach men how not to attack women, instead of asking women not to drink or to come back home early, or telling them what not to wear or who not to sleep with.

Mona was herself brutally attacked and sexually assaulted by Egyptian riot police during the Tahrir Square protests in Cairo. The attack left her arms fractured and in casts. But she was lucky. She managed to somehow tweet the fact that she was arrested from a friend’s phone and there was global furore to release her. “Otherwise, who knows, I would have simply disappeared,” she told us. She lived in New York for a while after this, but then returned to Egypt to continue her struggle against patriarchy. She told me how she has reclaimed her own body. Her hair is now always coloured red and she now has tattoos on her wrists — symbols of how she has reclaimed her own femininity and her own agency. “The riot police left scars on my body that were not of my choice but my tattoos are my own,” she told me.

“There are great links between feminism and the LGBT movements,” she continued, as we hung out in Mumbai after coming back from Delhi, gossiping and ideating. “We need to bring down patriarchy together.” I couldn’t agree more and will always be grateful to Richa and Anant of Caravan for bringing us together. We’re going to start a new Cairo-Mumbai express connection now, so watch out world!

My other Bridge highlight was finally meeting the 18-year-old Ginni Mahi. Ginni (whose real name is Gurkanwal Bharti) is an internet sensation with tens of thousands of fans on YouTube and Facebook. Her Punjabi folk songs are about the struggles of Dalit icons like B. R. Ambedkar and Sant Ravidas. She sang her most popular song, Fan Baba Saheb Ki at the conference, which was deeply moving. “I am the daughter of Babasaheb, who wrote the Constitution.” So many of us talk about intersectionality theoretically but Ginni actually lives it out daily, when she makes connections between Dalit rights and women’s rights. Ginni also spoke about how gender is a continuum and how we shouldn’t limit it to male or female but also include the transgender community in our discussion. It was quite something to be in her presence. Go check out her videos right now. That’s an order.

At our panel at the World Economic Forum, I spoke to Smriti Irani and others about this very same intersectionality. As we imagine the future of India through the lens of diversity, we cannot imagine a country in which some sections are included but others are not. So women, LGBT citizens, people from different religious backgrounds and those with disabilities…all of us need to be included in the future we create together.

Regular readers of this column would know how passionate I am about LGBT inclusion, in particular. I recognise that I’m a rare creature — an openly gay person in corporate India living and working confidently along with other LGBT employees in a company that respects us. It’s interesting that on one side we have progressive companies like Godrej — completely desi, home-grown organisations that are championing diversity as something very Indian and linked to our values, and then there are so many others that talk about diversity as an ideal but do very little in practice.

Removing diversity barriers for me personally means removing hypocrisy and inviting others to join this journey. At the summit, I spoke about how I am genuinely surprised why other Indian companies do not champion LGBT rights like we do at Godrej. The courts will figure out Section 377 — it has to go eventually. It has no place in any modern civilised society. Meanwhile, there is no law that says that institutions shouldn’t protect the rights of their LGBT employees and create an equal workplace.

The benefits of equality are evident. According to recent international studies, India can move up several notches in global competitiveness indices if they become LGBT-friendly. Studies within the country have shown that 64 per cent of youth looking for corporate jobs want to work for LGBT-friendly companies. So even from a sheer economic perspective, being diverse and inclusive makes sense.