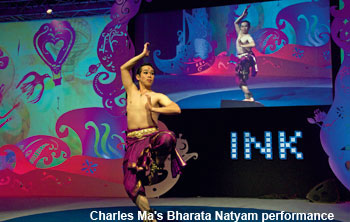 Notes from the INK 2011 conference in Jaipur

The City Palace in Jaipur can really turn on the India exotic. Rose petals being thrown on us as we enter? Check. A line of painted camels horses and elephants? Check. Snake charmer, puppeteers, dancing women with pots? Check. And then there comes this point in the night when I find myself being choreographed by Longinus (of ‘Jai ho’ and ‘Pappu can’t dance’ fame) to ‘Kolaveri di’, surrounded by three amazing women.

To my right, 69-year-old Thermax director and philanthropist Anu Aga keeps pace effortlessly. In front, is ‘vervacious’ photographer Anusha Yadav, who has started an important Memory Project to archive India’s personal and family histories. To my left, the feisty 15-year-old Aisha Chowdhary, who was born with a rare immune deficiency and overcame a predicted life expectancy of one. Even now, after years of multiple medical operations, Aisha only has a 40 per cent chance of survival, but her incredible spirit has charged the INK (Innovation and Knowledge) conference right from day one. “My soul would have no rainbow if my eyes would have no tears,” she told us yesterday, as we celebrated her talk, and now as we dance happily, I think of how blessed I am, to be in this moment.

I wander over the City Palace complex with my new best friend, the 18-year-old Babar Ali who just happens to be the world’s youngest headmaster. We chat about the talks we have witnessed and the elasticity with which our minds have had to expand to absorb the intense sensory overload. We don’t talk about the all-night parties, although these have been spectacular. (The previous night, we were escorted by a police convoy to the top of the Amer fort, where we partied under the stars, and today’s palace celebration is hardly down to earth, by comparison.) We don’t talk about the group camaraderie, although that’s been extraordinary as well, including a spectacular collective drum-jamming with all conference attendees, led by Monsoon Wedding’s singer-actor Vasundhara Das.

Instead, we talk about the amazing performers we’ve witnessed – from Gokul Das’ dhaak playing, in which he fused folk and classical beats, to Robert Gupta’s sublime stunning violin performance. Charles Ma, the celebrated Bharata Natyam dancer from Bengaluru, grabs us in a collective hug for a photo. Charles had to face a lot of discrimination (being male and having Oriental features, just to start with) to pursue his dream. But, as he said before his dance, “If there is purity of intentions you will flow through the complexities of life like the river Ganga.”

We talk about Babar’s own purity of intention. Babar started Anand Shikha Niketan, his own school, in his village in the extremely poor Murshidabad district of West Bengal when he was just nine. His quiet determination since then grew the student body from eight to 800, even while the school itself functioned under the open sky, in the yard behind Babar’s village home. This year, the INK community and the Bangalore chapter of YPO came together to provide the school with its own pucca building, which will be ready in 2012. Babar now has his sights on building a college in his village, even as he navigates through his own college degree.

“The price tag on my soul is only for my manager to see and my owner to know,” was the last sentence of Suman Sridhar’s spoken word piece in a heron-stage musical performance. As I walk, I mull over the different prices that the INK speakers had to pay on their individual journeys of success.

Take Shirin Juwaley, for instance. Her husband threw acid on her face two months after their arranged marriage when she asked for a divorce. She told us that having acid burns was a price she was willing to accept to be able to get out of the marriage, but what has pained her more, is how people react to her on seeing her face. “Our attitudes are the real disability, and we need to address that. Children get scared of me, people stick to walls when I pass by. People say loudly in trains – oh I can’t bear to look at her, as if I can’t hear them. Pregnant women tell me they can’t see me as their unborn babies shouldn’t be near ugly things. I also get thrown out of restaurants.

“There are over 9000 burn survivors in Mumbai alone,” Shirin continues. “Where are these people? Why are they hiding? And what world do we have in which, these people are invisibilised?”?Searing words, that left a lot of us, including me, silent.?Please see Palash Foundation – it is the organisation Shirin has started in Mumbai, to address social and livelihood issues for those who have visual disfigurements. (http://www.palashfoundation.org/about-us.html)

Magsaysay awardee Dr Prakash Amte (he is the son of Baba Amte), who runs the Lok Biradari Prakalp in Maharashtra, Andhra Pradesh and Madhya Pradesh, told us the story of a patient who he treated for bear bites. The blind patient was brought in after travelling for 60 kilometres, for 48 hours, on the shoulders of relatives. Dr Amte didn’t have access to any anesthetics so he treated the patient without them. There were 100 stitches required and the patient didn’t complain. One year later when Dr Amte enquired about the patient, he was told that the patient had died due to starvation as his family did not have enough food to feed him. “He was saved from bear bites but malnutrition killed him. This is the India in which we live,” he said, while smiling serenely on stage.

I wondered how people like him or Shirin or Aisha manage to remain positive, cheerful and so inspiring, despite encountering suffering every day. How is it that some of us crumble under life’s pressures, while others use these to propel themselves towards excellence? Anu Aga told us on the INK stage that some changes in her life were planned, but some were unplanned: “In my 50s I lost my husband who was also my best friend, then 14 months later, I lost my 25-year-old son. I have realised since then that people think of death as tragedy but death is not tragedy, it is inevitable. The real tragedy is not investing in the living.” Anu has now dedicated her life to giving, with her focus being childhood education, and she is pursuing philanthropy with the same zeal with which she pursued business while running Thermax.

It is ultimately about choice. Columbia Business School professor Sheena Iyengar, who is blind, and the celebrated author of The Art of Choosing, spoke the next day from the heart about her life and the choices that she made while growing up Indian-American, which now defines who she is.?Here is an excerpt from her book, which you really should read, if you haven’t already: ‘My parents had chosen to come to this country, but they had also chosen to hold on to as much of India as possible. They lived among other Sikhs, followed closely the tenets of their religion, and taught me the value of obedience. What to eat, wear, study, and later on, where to work and whom to marry – I was to allow these to be determined by the rules of Sikhism and by my family’s wishes. But in public school I learned that it was not only natural but desirable that I should make my own decisions. It was not a matter of cultural background or personality or abilities; it was simply what was true and right. For a blind Sikh girl otherwise subject to so many restrictions, this was a very powerful idea. I could have thought of my life as already written, which would have been more in line with my parents’ views. Or I could have thought of it as a series of accidents beyond my control, which was one way to account for my blindness and my father’s death. However, it seemed much more promising to think of it in terms of choice, in terms of what was still possible and what I could make happen.’

Krushnaa Patil, who became the youngest Indian woman to successfully climb Mount Everest in 2009 at age 19, spoke about how at a crucial point on every major climb, she has to choose – do I go across that ridge, even though it’s dark, and the snow is whirling about and slapping me on my face, and it is going to take me 15 hours to get across, or do I turn back? Come to think of it, all the people who inspired me at INK were inspiring because of the choices they made.

These included Ramji Raghavan, an NRI banker who made a choice to return to India and start Agastya, a unique organisation that uses mobile science vans, and mega science fairs to spread science education in rural India. Or Arunachalam Murugunatham, whose journey towards making low cost sanitary napkin machines that serve India’s rural poor was both hilarious and poignant. These low cost machines will enable the creation of a million jobs for rural women; besides of course creating better hygiene for something that people really don’t talk about much in this country.

I loved seeing young Abhishek Bhagat’s automatic cooking machine called Robocook. Abhishek, who is from rural Bihar and received the Rashtrapati Award from President Pratibha Patil this year for his innovation, created it by using a simple 10th standard physics textbook. He wanted his machine to give “maa ke haath jaisa khana” and also help ease the chores of his mother in the kitchen. There were many other hi-tech innovations showcased at INK – but the ones that stood out, at least for me, were the ones that directly addressed contemporary India and its needs, like Abhishek’s.

Many of the speakers at INK made the choice of sharing their work with the world for free, and trusting that the world would value it. So Kalyan Varma, the wildlife photographer, put up his photographs on the web under a Creative Commons license. This got him several professional assignments, besides bringing him global fame. Likewise Harpal Singh, Chairman Emiritus of Fortis Healthcare, told us about how he built his Nanhi Chhan Foundation as an open source model – at the intersection of the girl child and the environment. “People could adapt it in whichever way they wish.”

Some days before INK, I co-hosted the Names Not Numbers conference in Mumbai with the fabulous Julia Hobsbawm from London. It was a beautiful crisp Mumbai winter morning (well, as crisp as Mumbai winters go by our standards!) and the Coomarswamy Hall was decked up in pink and white, while a large white tent on the lawns served lunch and refreshments. At our event, Shashi Tharoor spoke passionately about daily corruption in India, and there were several other high profile speakers, but just like at INK, I realise upon reflection, that I gravitated more towards the ones who had made the choice to act.

Vikram Mehta of Shell and Vinita Bali of Britannia gave concrete examples of corporate philanthropy from India. “We need to replace the S of Corporate Social Responsibility with Sustainable,” said Vinita, as she spoke about how she is fortifying Britannia’s biscuits with iron, to combat malnutrition. The inspiring Roopa Purushothaman spoke about how we need to get over our obsession with scale in achieving social change. Small changes matter too. I’m a fan of Roopa and her Avasara school, that she is building as a centre for excellence for India’s girl children, and can’t wait for it to start operating, so that I can go there and give guest lectures to India’s future leaders.