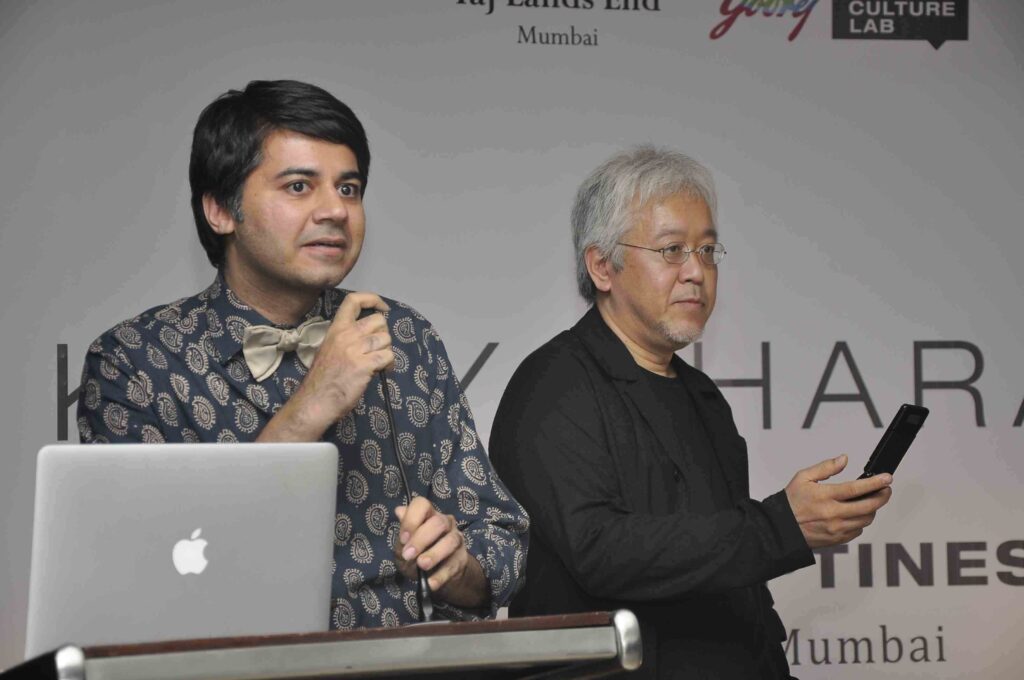 My two days with Kenya Hara

Last month, I hosted Kenya Hara in Mumbai as he made a special pit stop in the city on my request, after appearing at the Tokyo Fashion event at the Wills Fashion Week in New Delhi. I’d organised a special lecture for him through the Godrej India Culture Lab, in collaboration with the Taj Group of hotels and other Japan-based partners, and what I remember most about the two days that I spent with him are his absolute humility and desire to learn. It’s a quality I have found in most of the iconic figures I’ve met, and Hara-san only reinforced this. (San is a suffix like ji in Hindi, which denotes respect. It is just one of the many commonalities between Indian and Japanese cultures; leaving footwear outside the home is another.)

For the non Muji fans, a short note of introduction. Hara-san is the creative director of Muji, a brand which has redefined the global design language since its foundation in 1980 with its approach towards simplicity, minimalism, emphasis on recycling, and a no-logo philosophy. Muji products are exquisitely designed, extremely bare and muted. The colours are either white, or grey or beige, and nothing, I repeat, nothing in them is superfluous, whether it is a CD player, a chair or a bag of chips.

Much of Hara-san’s work beyond Muji, including the programmes for the opening and closing ceremonies of the Nagano Winter Olympic Games, is deeply rooted in Japanese culture. He has written several books like Designing Design and White, and these have been translated into a number of languages, including other Asian languages. Among the many roles that he currently performs in between his global jet-setting are?professor at Musashino Art University and president of the Japan Design Committee Company as well as the Nippon Design Center, and so I was especially happy that he took two precious days out of his schedule and spent them with me.

We had a blast, doing as many design related things as we could. We went to galleries like Abhay Maskara’s and shopped like mad at Bungalow 8, from which he shipped home a whole lot of stuff. (Yes, Jamini Ahluwalia’s carved wooden candle stands will soon be making their Tokyo debut.) Maithili and Jamini also hosted a dinner for Hara-san at their gorgeous Carmichael Road home, where they spread out an exquisite array of vegetarian food from across India – fresh dosas served by a chatty dosawallah, idiyappams and stew, piping hot jalebis and bhel, accompanied by champagne and nariyal pani. I stuffed myself silly, as did Hara-san, and this was after we’d gorged on the Taj Lands End spread of smoked salmon finger sandwiches, green pea and dried grape samosas, caramelised onion quiche, fresh scones and cream…. Yes, the lose weight resolution is already failing.

Let me stop talking about food, and instead write about the wonderful lecture. Hara-san divided his talk into three parts. First, he described the concept of emptiness in the Japanese design culture by linking it to the country’s ancient past and recent history. Emptiness is intrinsic to Japanese-ness, he said – whether in its origins from nature or its manifestations in shrines, buildings, products, movies or comics. And there could be many reasons for it. Perhaps it is because Japan is geographically located in such a way that it absorbs many influences but doesn’t want to be subsumed by any. However, the Japanese idea of emptiness is different from the western concept of simplicity or clean design. Empty does not mean simple, Hara-san explained. Empty is about the possibility of being filled. It is about alternatives, about potentiality. He illustrated this with a wide range of examples, right from the construction of the door of a Japanese shrine, to the red circle in the Japanese flag to Japanese conference room meetings in which nothing is said but everything is implied and understood. Another interesting example was that of knives. For Hara-san, a Western style knife might be well crafted and easy to use because it is ergonomic. The thumb automatically finds its place when you grab the knife and the grip is perfect. In contrast, a Japanese style knife doesn’t have a fixed grip. So at first glance you might think that the Western knife is better designed. However, on the contrary, if you think that the Japanese knife’s universality enables any user, of whatever age, gender, size or skill set, to hold it at any angle, anywhere on its handle, then you realise that the Japanese knife is empty and perhaps more beautiful.

Secondly, Hara-san spoke about how the brand Muji was created almost as a response to the excessive surge of consumerism that Japan was undergoing as part of its economic boom in the 1980s. In that time of excess, Muji decided to focus on the basics. No logo, streamlined products, a focus on natural colours and packaging, and a philosophy of recycling. It has since then grown rapidly all over the world, not just as a brand but also as a lifestyle. The Muji concept embodies the emptiness that Hara-san described. As he said, some think Muji is about no design, some say it is about ecology some think it is about cheapness, others about luxury, but Muji accepts everything. Muji is an empty vessel for people’s imagination.

While listening to him, I couldn’t help wonder…. The trajectory of growth in India has been of excess and over-embellishment over the past few years. Would such a brand that focuses on minimalism actually fly in India? I was pleased to see how the people at the Taj Lands End were responding to Hara-san’s philosophy but wary that this was a pre-selected invitee-list of Mumbai’s creative elite. As if reading my mind, Hara-san commented that India too has its own history of emptiness, whether in the number zero or in other concepts. However if a Muji has to come to India, it will have to come from India. One can’t simply import Japanese ideas. They have to take hold from within. So, what would an Indian Muji be like? Much more crafts-oriented I reckon. We have time to mull over this, as there are sadly, no imminent India launch plans.

The final part of Hara-san’s talk was about his curatorial projects, like Senseware, that first opened two years ago in Tokyo and then in Milan with much acclaim. The exhibition explored the potential of synthetic fibre technology or man-made fabric through design. Hara-san feels that while a lot of low cost fibre manufacturing has now shifted to developing economies, Japan still had the technology as well as the aesthetics needed to be a leader in the development of innovative advanced fibers. Such fibres have several applications including artificial blood vessels, airplane fuselages and membranes for water filtration. He curated Senseware as an exhibition to showcase how some of these new fibres might be used by assembling cutting edge Japanese minds to collaborate on their potential uses.

The Senseware ideas that Hara-san showed us in Mumbai included a sofa which could change its shape, a floor-wiping robot, a smiling car, a paper- thin carbon fibre chair, a fun mask made of non-woven fabric in the shape of a chimpanzee mouth, and blocks of light-penetrable concrete which were cast around plastic optical fibres. He also spoke of a near future, in which the artificial and natural would merge through technology; that is, about artificial fibres being created from natural, organic and eco-friendly materials. All of the ideas shown were super – and while most of them would not make it to commercial production, they served as important lenses through which we can glimpse the future of materials and their uses. Again I found myself thinking about how we might perhaps commission our own nation’s innovators to work with materials that we have in India in abundance, such as jute or bamboo, and infuse them with the advantages of high-technology. MP Ranjan would have a lot to say about this, and I wish I could have taken Hara-san to Ahmedabad to meet him and other professors from NID – and also to many other parts of India – but we’ll have to save all the travel for his next trip.

House Vision is Hara-san’s next big ambitious project. This is a project that he is beginning to curate in Japan, but wants to eventually bring to China and India. It involves creating collaborations between architects, engineers, health, transport, energy and utility companies, to innovate in the way people live and experience their homes. Just like with Senseware, he wants to build a gigantic exhibition, with prototype houses of the future. How might people use their home’s floor for instance to monitor their health functions? Can the floor measure one’s temperature and blood pressure?

Hara-san believes that for years, while Japan was a rising economic superpower, its architects and designers were producing good, but boring and repetitive work. However, now that their economy is at a crisis because of the demographic and other situations, their designers and architects are being challenged once again, and they can use their skills to great use. What solutions will come out of addressing an older population for instance or a population in which the majority of people are single? The challenges would be different in other countries like China or India, but this is what makes the project exciting. This is the age of Asia, Hara-san declared finally. Can we create solutions from within Asia that will then be used for the rest of the world?

I am going to end this blog post on a slight PJ note, with a joke that I coined, in honour of Hara-san’s visit. What did the Indian cow say to Kenya Hara when it encountered him on the road? Moo-ji, of course.