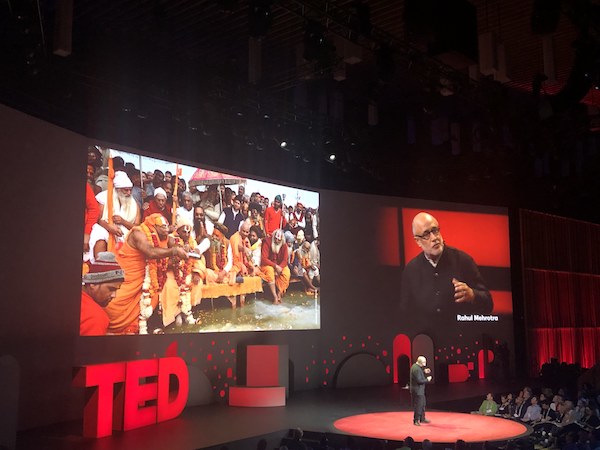 I became a TED fellow in 2009, and it felt very poignant that as the programme was celebrating its 10th anniversary, I was also completing the last year of the TED senior Fellowship. It was an interesting time back then – I had just written my book Gay Bombay and I had become a Fellow in recognition of my work on the book – which, at the time, was a very unique ethnography. I then disengaged with the Programme because I got caught up in work, but I’m glad I reconnected with it some years ago. It has been a remarkable 10 years – the TED Fellows programme has provided transformational support and has truly played a pivotal role in my life. Helping host the TED India Fellows Summit here at the Culture Lab and reconnecting with the Programme through that has been very special to me.

As always with every TED I’ve attended – I may be biased – but the best part for me has always been the TED Fellows. There have been 472 Fellows so far, and it has nurtured 90 new businesses and 46 non profits. Fellows have collectively published about 40 books and have done 600 performances. It is amazing how this community has grown both in size and impact over the last decade and it truly fills my heart with joy that I am a part of the TED Fellows programme. As a Senior Fellow, it is always delightful to see new Fellows come in every year and to learn about the amazing work that they’re doing.

I remain impressed by all the new Fellows, but the most significant part of the programme to me was how people have contributed to art and culture, keeping it richer than ever.

This drew me to Samuel Bazawule, who spends his time between New York and Ghana and tells us stories about the polyphonic African Diaspora through film.

His movie, The Burial Of Kojo dives into illegal mining in Ghana and taut family relations. It is told through the eyes of Esi, a young girl, and it is a visually stunning experience. Kiana Hayeri’s photography, especially her work in Afghanistan, takes an intimate and rare look at the lives of war stricken families – her photographs tell you so much about loss, family and love.

Amma Ghartey-Tagoe Kootin, a scholar and artist from the US, showcased an excerpt from her brilliant new musical theatre piece called At Buffalo which looked at different ways in which race was manifested in the 1901 World Fair in Buffalo, New York. It dealt with the different lenses through which we’ve viewed race over the years – through exoticisation, through labour, and even through scholarly work on race. The piece explored how ‘blackness’ has been talked about – through exhibitions on plantation workers to Du Bois’ academic work, and everything that has happened since then. She mixes anthropology and music to create a masterpiece – I can’t wait to see the finale of it.

Space environmentalist Moriba Jah strives to make a cleaner space – he is working towards getting rid of the astro-junk which has accumulated throughout space such as old satellites, rockets and other man-made junk. His ultimate goal is to create a safer and more sustainable space as he maps all of the junk in orbit right now and creates a crowdsourced citizen platform that helps us make space cleaner.

Arnav Kapoor, our own desi, is from MIT Media Lab and is essentially working on a device that can read your mind – his demonstration of this device was so exciting for all of us present.  Gangadhar Patil, who is from 101Reporters in Bangalore, is working towards providing grassroots reporters with national as well as international platforms.

From the main-stage, what really floored me was how powerful it was when people of colour spoke. TED has often been criticised for being an elite, Silicon Valley boys club. I’m so glad to see how TED has really doubled down on curation over the past few years and focussed on diversity. I felt such desi pride when my two dear friends, Sharmeen Obaid Chinoy and Rahul Mehrotra spoke about how they are changing their worlds, brick by brick, in two back-to-back sessions.

Sharmeen Obaid Chinoy is an Oscar award winning filmmaker, but she spoke about how we need to do more with film to make true social change. Right now she is working on a very ambitious project, which is to take films from village to village across rural Pakistan in the spirit of ‘mobile cinema’, engaging with the local audience and starting a conversation in places where these films may not reach. Bit by bit, she is creating a different world.

Rahul Mehrotra, who is an architect and a professor (I’ve been a fan of his for years!), spoke about the Kumbh Mela as a transient space and described its architecture as a porous and temporary city which emerges and eventually submerges. Using this framework, he shed light on the type of architecture that we need – one that requires impermanence, softness and hacking. The type of architecture which is environmentally friendly and does little damage to this earth. It was breathtaking to see how he distilled his whole lifetime of work on the TED stage – I was so proud.

Julius Maada Bio, the President of Sierra Leone, spoke about the marvellous work he is doing to further innovation in his country – he was first brought to power as a military leader and now as a democratically elected leader. Carole Cadwalladr, who broke the Cambridge Analytica scam, spoke about the need for making technology companies more accountable. If it wasn’t for investigative journalists like Carole, then we wouldn’t be knowing the extent of the damage wrought by groups like Cambridge Analytica that mine data and help influence elections all over the world.

John Gray, who started the Ghetto Gastro in Brooklyn, New York, brings race and food together to start a culinary collective and cultural movement. John works with disadvantaged communities to make food a matter of pride for them – it’s race meets food meets entrepreneurship.

Britney Packnett was amazing – she spoke about how a lack of confidence is structural – how certain groups are told that they should feel less than. Her talk was a clarion call for reclaiming confidence – it is a political, revolutionary act.

I also loved what both America Ferrera and Daniel Lismore had to say about identity – just seeing people of colour and queer people made a difference this year at TED. The reason why a conference like TED works is that it is an incredible opportunity to really connect and discover your own kind of people.

The Fellows Programme helped all of us find each other and and I’m sure these bonds will survive after that. We should now focus on how we could work together, create change and amplify each others work. TED has done an astounding job at creating these ties – how we further them in our lives is something I’m going to be reflecting upon.