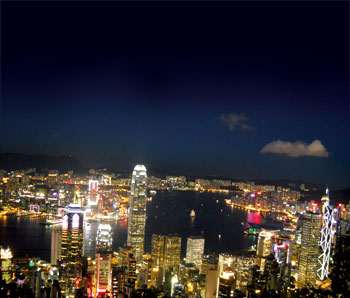 Wonder down under: Travel notes from Sydney and Melbourne

It’s not every day that one gets to give a keynote speech at the Sydney Opera House, so I quickly said yes when the invitation was extended. The Facebook warnings started soon after. “Be careful of racists,” one person warned. “Don’t go out after dark,” said another. I know that these friends meant well, but it made me reflect on how biased we all are in our own particular ways. The moment we paint an entire nation with a common brush – aren’t we displaying our own prejudice? I don’t even want to get into how racist some of us Indians are to foreigners within India or to other Indians, who might be different; let’s save that for another post, maybe. For now, I’m happy to report that I had an amazing time in Sydney and Melbourne, and will definitely go back for more.

History was being made during the course of my visit, with Julia Gillard taking over as the first woman Prime Minister of that country. As I was exiting the Sydney airport on my arrival, a posse of paparazzi ran towards me. Delusional as I am, I wondered if they’d been informed about my monumentally important talk and were there to interview me. Alas, my cheeks-sucked-in pout was ignored; the flashbulbs were for the petite Nicole Ritchie who happened to be walking two steps behind. The photographers followed our cars right up to the Four Seasons where we both coincidentally happened to be checking into and let me tell you that it is very annoying to be trailed by scooter-riding paparazzi if they’re not taking your pictures!

So that was my Aussie welcome. Having been so firmly put in my place, I rationalised that there was a good side to not being recognised. I could unashamedly act like a tourist! So I did everything that good desi visitors do when they go to Oz for the first time. I climbed the Sydney Harbour Bridge. I made the journey on the Great Ocean Road from Melbourne to see the 12 Apostles – ancient limestone formations in the sea that have been beaten into their magnificent shapes by the pressure of the waves over millions of years. Both of these were exhilarating experiences, even for jaded old me. I visited Bondi Beach and promised myself that I’d go on a diet…next month onwards.

Then, I also tried to squeeze in non-touristy experiences that were very local in nature. Café-hopping in Bohemian Melbourne neighbourhoods like Fitzroy and St Kilda’s, or stocking up on Balenciaga sneakers from hipster stores like Marais in Little Collins Street was fun. On one of my first nights in Sydney, I took a boat across the harbour to Manly island and watched the sunset while munching on vinegar-laden crisp calamari and chips, then sailed back for drinks in the cobblestoned courtyard of the 19th century Argyle bar in the Rocks district. I finally followed it up with a sublime Ravel concert at the Opera House. Similarly, on my first night in Melbourne, I took in Tilda Swinton’s bravura performance in I am Love at the Como Palace cinema over a glass of red wine and olive oil popped corn, while a voluptuous jazz singer crooned in the bordello style black and gold chandelier lit foyer outside. This is the kind of travel I adore as a single traveller.

Australia’s food and wine were reason enough to contemplate a second visit. I had excellent meals in both cities. Jeffrey de Rome at the Four Seasons’ Kable gives his retrospective French cuisine a modern twist and I loved his simple take on oysters as well as the ‘three ways’ entrée of Australian lamb. I had such a memorable Italian dinner at Otto, located on the wharf just outside the Taj Blue in Sydney that I decided to check into the hotel for a few days after my conference ended. The Blue is a gigantic wooden heritage building on the Cowper Wharf, right at the edge of the sea. It’s very charming, especially if you get one of the loft rooms like I did, and oh, Russell Crowe lives right next door, which means free eye candy if you’re lucky. (I wasn’t.)

In Melbourne, I chose the hip new Cullen Art Hotel, which channelises the mad energy of Adam Cullen, enfant terrible of the Australian art scene. With its funky architecture, graffiti-painted cows at the entrance and guest rooms filled with Cullen’s paintings (crazy horses, dead cats, headless women, punk men), it was totally my kind of place, plus there was the in-house Yum Cha restaurant to die for. I also felt at home in the campy Melbourne downtown salon of Madame Brussels, and gobbled up several of their pink cupcakes over high tea one afternoon. But my all-time favourite Australian meal has got to be the chicken and mashed peas pie that I ate standing on the road at 3 am, from the legendary Harry’s truck permanently parked outside Taj Blue. It reminded me of Bade Miyan’s baida rotis that I eat after partying all night in Mumbai. Filling. Fattening. Just right.

More than sightseeing, or shopping, or food, my Australia trip was about people and I feel lucky to have connected with such an incredible bunch. I spent two wonderful days with Robyn Kershaw and her incredible family in Melbourne. Robyn’s been tasting great success as the producer of the musical Bran Nue Dae, one of Australia’s biggest film hits of all times. The movie is an exuberant story about an Aboriginal boy’s efforts to travel back home after escaping boarding school, and Robyn’s been whizzing to places like Sundance and Cannes with it.

In Sydney, celebrity TV anchor Anton Enus took some time off from running ultra-marathons (some of these are 90 km long, and he has run 40 of them so far!) to shoot the breeze with me at Toby’s, his favourite coffee shop, while supermodel Anina.net (yes that’s what she calls herself!) took a break between bookings to introduce me to legendary Australian designers like Nicola Finetti. Anina’s drive is really something! She regularly walks the ramp for Sonia Rykiel and Dries Van Noten and has had a great season in China, having been voted the best foreign model there. But instead of sitting on her laurels, she’s busy building a mobile media empire that includes mobile applications for livestreaming fashion shows and downloadable apps for converting print magazines into their mobile iterations. I met her on the first day of my X Media Lab conference and was instantly impressed.

Oh yes, the conference! The primary reason for my visit. I first met Brendan Harkin and Megan Elliot, the conference organisers, with Shekhar Kapur at FICCI Frames in Mumbai two years ago. They’ve built X Media Lab as a unique think-tank that is not linked to a geographic home but instead spreads its tentacles far and wide across different countries. Each conference usually focuses on one aspect of media (animation, film, television), but sometimes, like for the one I attended in Sydney, there is the broader theme of Global Media Ideas. The conference starts with a keynote presentation day, and then extends to a few more days of mentoring sessions between local entrepreneurs and the international speakers who serve as their mentors.

For someone like me, the joy of participating is twofold. On one hand, by being a mentor, you get to understand, in a very concentrated amount of time, the ideas ecosystem in another country and see how it compares to yours, as well as what links can be made between the two. On the other, as a speaker, you connect, in that same concentrated amount of time, with other speakers from all over the world. In Sydney, I was most excited to get to meet people like Ralph Simon, the father of the mobile ringtone, Dana al Salem, founder of the website Fanshake, and Joy Mountford, the former military avionics designer who created Apple’s highly-acclaimed Human Interface Group.

The desi contingent was made up of me, Liquid Comics founder Gotham Chopra and author and New York Times columnist Anand Girdharidas. It was fascinating to observe the contrast between our presentations and those of the other two emerging market blocs at the event – the Middle East, and China. We desis were pretty reflexive and critically questioned the changes that were taking place around India and within the South Asian diaspora. Meanwhile Wayne Borg from Abu Dhabi was aggressively pitching the Middle East as a media power centre. The scale of their ambition is certainly admirable but I couldn’t resist a few naughty tweets when Wayne tried to argue that Abu Dhabi was a progressive place for women simply because Beyonce performed there recently and she didn’t have to tone down her dress sense!

The Chinese were an interesting contrast. Nick Yang was gung-ho about China’s success as evinced by its tall buildings, wide roads and the IPO market. Haidong Pan, on the other hand, quietly spoke about his challenges in building his website Hudong.com into the country’s largest wiki-style knowledge resource, with one million contributors and three million articles. This is a commendable achievement, given how tightly the Chinese authorities regulate the media within their country.

The four days of conferencing included four nights of parties. I had a surreal feeling one night as Anand, Gotham and I popped into a cab to go to a hip Surry Hills restaurant called Long Grain. Here were four young guys from the same origin country that fate had conspired into travelling together inside a metal box at 80 kms per hour. Each of us was in the midst of an incredible individual journey all around the world. Anand had just flown in from spending 36 hours in Bogota, Columbia. Gotham would fly back to LA the next day and then onward to Bangkok, where he would capture his dad Deepak Chopra’s monk ceremony on video. My next stop would be Hong Kong. Four guys, you wonder? Well, of course our cabbie was desi too!

At a party the next day, I was chatting with the zany VJ duo of Kat Black and Jasper Cook while they did some unauthorised projections on the wall of the Museum of Contemporary Art. Turns out that Kat taught Soundarya Rajnikant animation while she went to film school in Perth and both she and Jasper are huge Bollywood fans. Really, the more I travel the more I come to realise that like it or not, India’s going to follow you wherever you go. Thankfully, I like it…very, very much!

I was lucky that my visit coincided with the Sydney Biennale. The exhibition, which explored both themes – the beauty of distance as well as songs of survival – was spread over several venues. My favourite experience was taking the ferry across the harbour to Cockatoo Island to see the 120 works by 56 artists displayed there. A former prison and shipyard, Cockatoo felt like a fantastic crumbling film set with its leaky cavernous buildings, underground passages and rusty machinery that reached up to the sky. I went on a rainy cold day that made the ambience even more eerie. The convict-built prison buildings and warden houses had been left intact and in fact housed many of the art works. Many of my favourite pieces were installed in the giant Turbine Hall. These included Cai Guo-Qiang’s Inopportune: Stage One (from 2004), that comprised nine cars hung from the ceiling, pierced with rods of light. I was also very moved by the works of Australian artists like Mikala Dwyer or the Slave Pianos collective that were specifically made as responses to the troubled history of the island.

* This post is a modified version of my column Parmesh’s Viewfinder which appears in Verve magazine each month.