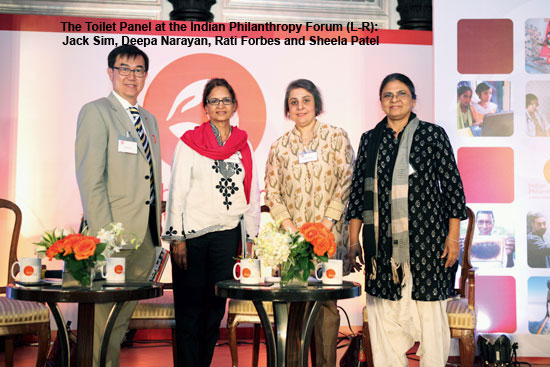 Notes from the 2012 Indian Philanthropy Forum

IPF may not have the sexiness quotient of the IPL, but the ideas that emerge from it are exciting enough to smash many of our country’s pressing needs out of the stadium. IPF stands for the Indian Philanthropy Forum, if you didn’t already know. Before going further I want to distinguish between charity and philanthropy. Many people use the term inter-changeably but there is a big difference. I’m going to quote Pierre Omidyar (founder of eBay, and now one of the world’s leading philanthropists through his Omidyar Network) in this regard, because he says it so well: “When I use the word ‘charity’, I think of what’s needed to alleviate immediate suffering. It’s just pure generosity driven by compassion, and it’s important but never ending work – there will always be more suffering. Charity is inherently not self-sustaining, but there are problems in the world, such as natural disasters, that require charity. Philanthropy is much more. It comes from the Latin for ‘love of humanity’. Philanthropy is a desire to improve the state of humanity and the world. It requires thinking about the root causes of issues so that we can prevent tomorrow’s suffering.” (Harvard Business Review, September 2011 issue.)

IPF is simply a collection of some of the best minds in the country, and some of the best poverty-action tools, all under one roof. My first highlight at this year’s event was a panel humorously called toilet training, but the statistics they presented were far from funny. Only 200 cities in India have sewers, revealed Sheela Patel of SPARC, while listing several other dire figures about the state of sanitation in our country. By now, a commonly used statistic is that India has many more mobiles than toilets. How do we solve this problem? All the panelists were in agreement that we need to understand local contexts, social and caste issues while working on issue of toilets and sanitation. They are all interlinked. Also making a positive change in sanitation can have ripple effects, for instance, in girl child education, since many parents don’t send their girls to school because the school doesn’t have toilet facilities.

Jack Sim of the World Toilet Organisation talked about muted demand for toilets. If we make them aspirational and market them well, toilets will be as well regarded as cellphones. “The big change in India can come from engaging pop-culture and Bollywood,” he added. “We need to make toilets sexy and aspirational.” He has just built 9000 toilets in Bhubaneswar, and is on a mission to build many more. He expressed the need of philanthropists to explain the importance of toilets to the poor emotionally and not logically. So telling someone that it is good for their mother not to walk for 2 hours far away in the night is better than appealing to their sense of health and germs. Or, telling a father that his son will get a better job if they have a toilet.

Rati Forbes made an important point when she said that philanthro-pists need to look at people they help sustainably, and not only at ‘projects’ and expected outcomes. “As philanthropists we look at impact and outputs but not sustainability; we often do not involve communities,” and this is why many projects fail. Twenty per cent of the Forbes Marshall Foundation money goes to the ‘not so sexy’ theme of sanitation said Rati, and I was very moved by her simplicity and clarity of vision. When communities are involved in the design of the toilet programme, a lot of positive change happens, amplified Sheela Patel. They take ownership of the project and want to use the toilets then. Sheela Patel shared that Shah Rukh Khan might be championing sanitation ads soon.

The panel on crafts was a lens into philanthropic support of a different nature. “The challenge of philanthropy is how we are going to support commercial activities that then support artisans and craftspeople,” said Adarsh Kumar, Founder of Livelihoods Equity Connect, which creates models that enable farmers and rural artisans to access commercial markets. “Philanthropy has traditionally sought to support poor producers in the value chain. It’s now time to support distribution and retail,” he added, because just working with producers has meant ending up with products that are not saleable and even if they are saleable, they cannot be distributed. Another thought from this panel was about how philanthropy can add value by developing audiences, and changing the consumer perceptions of India’s traditions.

I was pleased to see the latest Bain India Philanthropy Report 2012 that Arpan Sheth released at the forum. The first report that came out in 2009 was quite critical of Indians and how we give. This third report signalled strong signs of change. India’s affluent donated 3.1 per cent of their income last year compared with 2.3 per cent in 2010. And more than half of the respondents surveyed promised to increase their giving in 2012. Significantly, younger high net-worth individuals (under the age of 30) are the new key players in philanthropic decision-making, according to the report. In the US, philanthropy has long been the domain of older people. But, of the 398 Indian high net-worth families surveyed, 69 per cent reported that the younger generation was spearheading philanthropic decision-making, and 76 per cent have assumed “active roles” in charity initiatives. As Deval Sanghavi of Dasra said, this is something to be optimistic about. Only 15 years back, tech entrepreneurs were the novice givers in the US, and it is these that have created all the recent innovations in philanthropy – not old established names like Rockefeller or Carnegie. Perhaps these new young philanthropists will also drive change in our country?

Finally, it was a pleasure to listen to Mathew Bishop, the US editor of The Economist who wrote his book on philanthro-capitalism after meeting Nandan Nilekani. Prometheus, who stole fire from the gods to bring to man, was the original philanthropist, Mathew said, as he outlined five golden ages of philanthropy. The fifth one, in which we are now living according to Bishop, was kick-started by Ted Turner who gave a billion dollars away in 1997. His public scolding of Bill Gates and Warren Buffet catalysed the recent trend of the wealthy becoming actively involved in giving and of impact investing. Bishop calls this new age Billanthropy – and his quest to understand why people like Gates and Buffet were giving away most of their wealth, as well as his meeting with Nandan Nilekani, spurred him to write his book. At the forum, Mathew spoke about collaboration. We used to live in a world in which roles were clear: business, government or NGO. However In today’s world these roles are breaking down. Business looking at society. The government looking to NGOs for help. Today’s metaphor is the posse, said Mathew. You round up those you need to solve a particular problem.