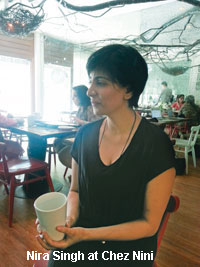 A Matter of Perfection

In the midst of a perfect meal at Delhi’s restaurant du jour Chez Nini, I pause, with a contented smile and look at the sun-dappled ledge of plants outside the large white windows. Everything in this tiny 30-seat bistro is perfect. From its wooden tables and the glowing tree centrepiece, to the way each dish is plated, to the quiet confident service, Montreal-born chef-owner Nira Singh has managed to create a magical space in the capital’s newest hipster paradise Meher Chand market. (Move over Hauz Khas Village, you’re so, like, three seasons ago.)

My beetroot, dill and feta salad oozes freshness, as does the green gazpacho. I leave the two classics – Nira’s version of French onion soup and the Canadian poutine (French fries, gravy, and curd cheese) for my next visit. Instead, I opt for an incredible melt-in-the-mouth duck burger and finish up with a chocolate tart with salted caramel, as well as a greed-induced carrot cake. Leaning back, I eye the designer handbags of the kitty party kittens who have just walked in, and chat with an apron-clad Nira about Montreal. I tell her I miss Schwartz’s – the Hebrew deli classic – and she smiles and tells me that everyone loves Schwartz’s, even Montreal locals, which is rare for such a tourist hotspot.

I am impressed by the perfection that Chez Nini has managed to accomplish, and imagine how hard it must be, especially for an out-of-towner like Nira to master her supply chain in Delhi. Everything at Chez Nini is absolutely fresh. For instance, Nira tells me that the duck in my burger is not from Delhi’s by-now-staple French Farm, but another discreet local supplier. Her pork comes from another farmer. The bread is made inhouse. She spent quite a while perfecting these small details before opening her bistro – and the results speak for themselves.

In food, such perfection is craved for, and places that achieve it accomplish cult status. I love standalone neighbourhood restaurants that do this more than hotel chains. This might seem unfair, I know, since I have had many extraordinary five-star meals; why only recently, I had at the Lucknow Vivanta by Taj’s Oudhyana, a luscious suran galouti kebab that was better than any mincemeat alternative. Still, I find that the personalisation and attention to detail in standalones is way more, such as at Le Bistro du Parc in Delhi’s Defence Colony (their poached pear in chocolate gave me a minor orgasm, when I had it recently) or at The Table in Mumbai.

It’s the same with stores. We have a surfeit of luxury brands – and branded stores in our country right now – but the ones that make an impression, are the standalone ones, that are a labour of love, and that seek to create a perfect experience at every step. Take MoonRiver in Delhi, for instance, that began as a home décor store a decade ago, but has since then transformed into a complete lifestyle destination. When I visit it, I see perfection all across – in the curatorship of objects, crafts, books, jewels, and clothes that owner Radhika Gupta, constantly magpie-like, sources from her travels across India and the world. The manner in which each item is wrapped, the way coffee is served with exquisite little cookies on the side, the beautiful tiles on the floor, the Diptyque candle alcove, the Afghan carpets, customised Gond sketches and Pichwai paintings stacked all around, and on the fashion floor, an amalgamation of chic (DvF, Zadig & Voltaire, Péro) and unheard of brands (Laurence Dolige)…. Around the corner on one of the floors, a Penguin Classics’ collection with leather-bound designer covers, a comfy café to sink in and mull over, and on the anvil, a juice bar and a flower shop.

I am overjoyed at rediscovering such a perfect little haven of tranquillity in Delhi. The last time I visited MoonRiver some years ago, it was a tiny store at Mehrauli that sold mostly glass vases. This Defence Colony bungalow version, with its own private garden, has enabled the idea to bloom and expand outwards. One of the interesting ideas they have come up with is the MoonRiver salon – a forum for book readings, film screenings and talks. When Radhika and my dear friend Sujata Assomull Sippy invite me to present my thoughts on knowledge ecosystems at one of these, I simply cannot refuse.

It is a pleasure to get to know Radhika a little better. I learn that she spent years studying law at King’s College, London, and then a few more studying journalism at Columbia University in New York – before deciding one day, in court – that what she wanted to do was quite different. So she gave up the law, just like that – and set up MoonRiver, inspired by the Audrey Hepburn song from Breakfast at Tiffany’s, because ‘there’s such a lot of world to see’.

I love it when people follow their hearts. I have found more often than not that perfection is achieved this way. Aamir Khan chose to describe his intensity to me as a quest for excellence. I had an hour-long conversation with him recently and I was deeply moved by his passion and integrity. Pursue excellence, not success, he advised, telling me that his entire life, he had acted purely on the basis of his own gut instinct, and then followed it up with sheer hard work. I find it strange that the word ‘perfectionist’ is sometimes used derisively for Aamir – shouldn’t we be instead lauding someone who works hard and sweats the small stuff, doing what he believes in?

There was a moment in the conversation, while talking about Satyameva Jayate, where Aamir just broke down, with tears flowing from his eyes, as he recounted the stories of how human beings can treat each other so horribly and also so wonderfully. I had asked him what he had learnt in his role as a national change agent, from meeting other philanthropists like Bill Gates or spiritual leaders like the Dalai Lama. He replied that more than other famous people, he learnt most from ordinary Indians, about how to overcome adversity. I especially loved when I asked him what had made his life brighter and he pointed to his wife in the audience and simply said “Kiran”.

* This blog post is a modified version of my column Parmesh’s Viewfinder that appears monthly in Verve magazine.